"Undoubtedly, 'Contributions to the Masculinity Complex in Women,' is an underrated paper. This may be due to its not being published in English until 1924, well after Freud introduced the term 'masculinity complex' into his own writings. However, Van Ophuijsen's paper was originally presented to the Dutch Psycho-Analytical Society much earlier, on 23rd June 1917. It was published in German the same year and in Dutch the following year. The term 'masculinity complex' is in fact van Ophugsen's invention and Freud acknowledges his debt in his 1919 paper, 'A Child is Being Beaten'. It is also in the present paper that various manifestations and possible consequences of penis envy are first clearly expressed, just as the libidinal investment in the 'virile' erogenous zone is linked to the attachment to the mother. This last point is particularly important, and Freud will later appeal to it in explaining the phallicism of the little girl. The material van Ophuijsen draws on derives from five case studies of obsessional women. One of the cases, who is here simply referred to as H., is subsequently discussed by Jeanne Lampl de Groot in her 1928 paper, 'Evolution of the Oedipus Complex in Women', a discussion Freud alludes to in his 'Female Sexuality' of 1931. The analysand was referred to Lampl de Groot because of difficulties encountered in the transference to a male analyst. It is also worth noting that van Ophuijsen takes her to be an obsessional, while Lampl de Groot diagnoses hysteria. Van Ophuijsen's starting point concerns one aspect of the theory of penis envy; namely, that it derives from the sense a woman has of having been injured in infancy through no fault of her own and hence she will blame her mother for having brought her into this world as a woman instead of a man. This matches some character types encountered in analysis, van Ophuijsen conjectures. He also points out that this turning against the mother is, as with the castration complex, founded on a belief in the possibility of possessing the penis. The difference between the castration and masculinity complexes is that the sense of guilt attached to the former is absent from the masculinity complex, in which, on the other hand, what predominate are the sense of having been wronged and accompanying bitterness and reproaches. Moreover, the term is intended to connote the presence of a form of rivalry with men rather than the presence of any overt masculine characteristics.
Finally, one should note the connection between the masculinity complex and the urethral erotism which van Ophuijsen explains in terms of a regression to the auto-erotic stage later tackled by other analysts such as Karen Homey." 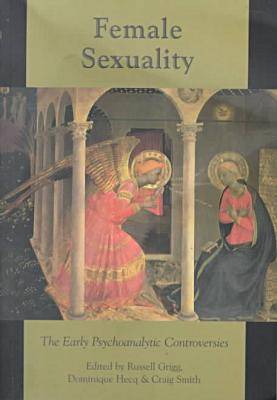 » Have you read this book? We'd like to know what you think about it - write a review about Female Sexuality book by Russell Grigg and you'll earn 50c in Boomerang Bucks loyalty dollars (you must be a Boomerang Books Account Holder - it's free to sign up and there are great benefits!)

A Preview for this title is currently not available.
More Books By Russell Grigg
View All

Tails from the Classroom: Learning and teaching through animal-assisted interventions
$45.46 $50.51

The Pathology of Democracy: A Letter to Bernard Accoyer and to Enlightened Opinion - JLS Supplement (Ex-tensions)
$226.80 $252.00