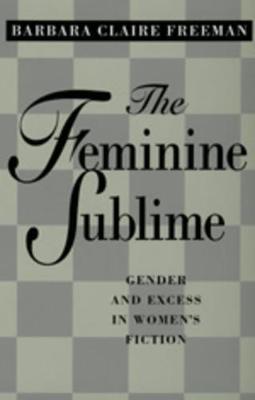 Gender and Excess in Women's Fiction

The Feminine Sublime provides a new and startling insight into the modes and devices employed in the creation of women's fiction since the eighteenth century. Barbara Claire Freeman argues that traditional theorizations of the sublime depend upon unexamined assumptions about femininity and sexual difference, and that the sublime could not exist without misogynistic constructions of "the feminine." Taking this as her starting point, Freeman suggests that the "other sublime" that comes into view from this new perspective not only offers a crucial way to approach representations of excess in women's fiction, but allows us to envision other modes of writing the sublime.

Freeman reconsiders Longinus, Burke, Kant, Weiskel, Hertz, and Derrida while also engaging a wide range of women's fiction, including novels by Chopin, Morrison, Rhys, Shelley, and Wharton. Addressing the coincident rise of the novel and concept of the sublime in eighteenth-century European culture, Freeman allies the articulation of sublime experience with questions of agency and passion in modern and contemporary women's fiction. Arguments that have seemed merely to explain the sublime also functioned to evaluate, domesticate, and ultimately exclude an otherness that is almost always gendered as feminine. Freeman explores the ways in which fiction by American and British women, mainly of the twentieth century, responds to and redefines what the tradition has called "the sublime."

» Have you read this book? We'd like to know what you think about it - write a review about Feminine Sublime book by Barbara Claire Freeman and you'll earn 50c in Boomerang Bucks loyalty dollars (you must be a Boomerang Books Account Holder - it's free to sign up and there are great benefits!)

Barbara Claire Freeman is Associate Professor of English and American Literature and Language at Harvard University.

A Preview for this title is currently not available.
More Books By Barbara Claire Freeman
View All