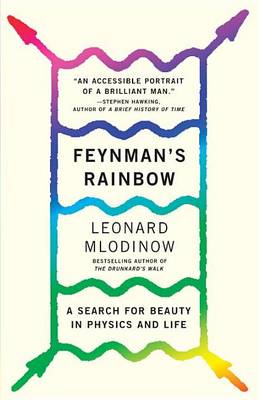 A Search for Beauty in Physics and in Life

Some of the brightest minds in science have passed through the halls of the California Institute of Technology. In the early 1980s, Leonard Mlodinow joined their ranks to begin a postdoctoral fellowship. Afraid he was not smart enough to be there, despite his groundbreaking Ph.D. thesis, he took his insecurities to Richard Feynman, Caltech's intimidating resident genius and iconoclast. So began a pivotal year in a young man's life. Though a series of fascinating exchanges, Mlodinow and Feynman delve into the nature of science, creativity, love mathematics, happiness, God, art, pleasures and ambition, producing a moving portrait of a friendship and an affecting account of Feynman's final creative years.

» Have you read this book? We'd like to know what you think about it - write a review about Feynman's Rainbow book by Leonard Mlodinow and you'll earn 50c in Boomerang Bucks loyalty dollars (you must be a Boomerang Books Account Holder - it's free to sign up and there are great benefits!)

LEONARD MLODINOW received his Ph.D. in theoretical physics from the University of California, Berkeley, was an Alexander von Humboldt Fellow at the Max Planck Institute, and was on the faculty of the California Institute of Technology. His previous books include the best sellers Subliminal (winner of the PEN/E. O. Wilson Award), War of the Worldviews (with Deepak Chopra), The Grand Design(with Stephen Hawking), and The Drunkard's Walk: How Randomness Rules Our Lives (a New York Times Notable Book), as well as Euclid's Window. He also wrote for the television series MacGyver and Star Trek: The Next Generation. www.leonardmlodinow.com

A Preview for this title is currently not available.
More Books By Leonard Mlodinow
View All