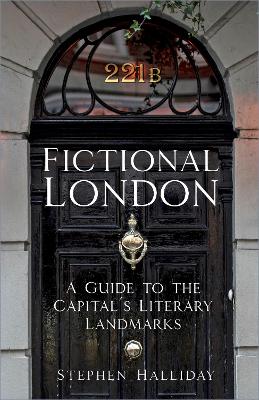 Fictional London: A Guide to the Capital's Literary Landmarks

Description - Fictional London: A Guide to the Capital's Literary Landmarks by Stephen Halliday

The only guide to London's literary landmarks is updated in this new edition. London is unrivalled as a source of inspiration for writers from Geoffrey Chaucer to J.K. Rowling. Fictional London will explore the capital both from the viewpoint of the many writers who have used it as a stage for their plots and their characters; and of the readers whose imagination is fired by the knowledge that they are standing outside the home of David Copperfield on the Strand or Count Dracula's residence in Piccadilly. All of London's clubs, pubs, restaurants, houses and streets that have been made famous in the works of the likes of Sir Arthur Conan Doyle, Ian Fleming, Charles Dickens and Evelyn Waugh are featured in this exhaustively researched volume. Listed geographically, each entry provides a description of the location, its place in literature and its inspiration. From Fleming's legendary Blades Club in Mayfair, that made appearances in both Moonraker and Goldfinger, to Waugh's bohemian Shepheard's Hotel from Vile Bodies, that was based on the celebrated Cavendish Hotel, to the haunts of Sherlock Holmes and Bertie Wooster, Fictional London will appeal to all lovers of classic fiction set in the great city. AUTHOR: Stephen Halliday is a lecturer, broadcaster and writer of many books and articles with a particular interest in the history of London from Roman times to the present day. His has previously published several books with The History Press, including London's Markets (2014), Underground to Everywhere (2013) and The Great Stink of London (2001). 20 b/w illustrations

» Have you read this book? We'd like to know what you think about it - write a review about Fictional London: A Guide to the Capital's Literary Landmarks book by Stephen Halliday and you'll earn 50c in Boomerang Bucks loyalty dollars (you must be a Boomerang Books Account Holder - it's free to sign up and there are great benefits!)


A Preview for this title is currently not available.
More Books By Stephen Halliday
View All

Journey to Crossrail: Railways Under London, From Brunel to the Elizabeth Line
$35.51 $39.46