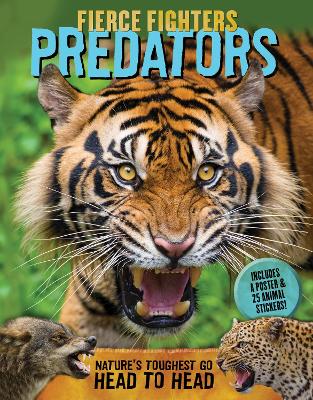 For the worlds fiercest predators, winning is second nature. But what would happen if they forgot their prey and battled one another, instead? Featuring dozens of the worlds greatest hunters, Fierce Fighters: Predators showcases the most epic battles imaginable between the champions of the land, sea, and sky.

Grizzly versus mountain lion. Electric eel versus piranha. Orca versus great white shark. Komodo dragon versus tiger. Python versus king cobra. These arent just head-to-head match-ups--they are tooth-to-tooth and claw-to-claw. Deadly venom against powerful jaws. Speed and agility against brute force. Brainy mammals against cold-blooded reptiles with a survival instinct millions of years in the making. Weigh the skills of the contestants and try to guess who will emerge victorious, then check and see if the experts agree. In these dozens of earth-wide battle royales, can you predict the most ferocious fighters of all?

» Have you read this book? We'd like to know what you think about it - write a review about Fierce Fighters Predators book by Lee Martin and you'll earn 50c in Boomerang Bucks loyalty dollars (you must be a Boomerang Books Account Holder - it's free to sign up and there are great benefits!)

Paul Beck spent twenty years developing exhibits for Seattle's hands-on Pacific Science Centre, and has been writing about science since 1994. He is the author of more than thirty books, including Uncover a Dog, Uncover a Cat, Skulls, and The Field Guide to Safari Animals. He lives in Seattle.

A Preview for this title is currently not available.
More Books By Lee Martin
View All