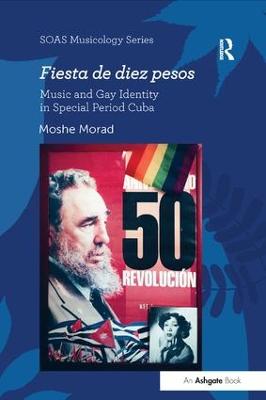 The 'Special Period' in Cuba was an extended era of economic depression starting in the early 1990s, characterized by the collapse of revolutionary values and social norms, and a way of life conducted by improvised solutions for survival, including hustling and sex-work. During this time there developed a thriving, though constantly harassed and destabilized, clandestine gay scene (known as the 'ambiente'). In the course of eight visits between 1995 and 2007, the last dozen years of Fidel Castro's reign, Moshe Morad became absorbed in Havana's gay scene, where he created a wide social network, attended numerous secret gatherings-from clandestine parties to religious rituals-and observed patterns of behavior and communication. He discovered the role of music in this scene as a marker of identity, a source of queer codifications and identifications, a medium of interaction, an outlet for emotion and a way to escape from a reality of scarcity, oppression and despair.

Morad identified and conducted his research in different types of 'musical space,' from illegal clandestine parties held in changing locations, to ballet halls, drag-show bars, private living-rooms and kitchens and santeria religious ceremonies. In this important study, the first on the subject, he argues that music plays a central role in providing the physical, emotional, and conceptual spaces which constitute this scene and in the formation of a new hybrid 'gay identity' in Special-Period Cuba. » Have you read this book? We'd like to know what you think about it - write a review about Fiesta de diez pesos: Music and Gay Identity in Special Period Cuba book by Moshe Morad and you'll earn 50c in Boomerang Bucks loyalty dollars (you must be a Boomerang Books Account Holder - it's free to sign up and there are great benefits!)

Moshe Morad is an ethnomusicologist, journalist and radio broadcaster, who has also presented 'on location' world music programmes on BBC Radio. His vast experience in the music industry includes managing the 'Hemisphere' world music label at EMI. He completed his PhD at SOAS, London, in 2013, following longitudinal fieldwork in Cuba.

A Preview for this title is currently not available.
More Books By Moshe Morad
View All