Fight Club 2 is avaliable exclusively as a Graphic Novel!

Some imaginary friends never go away . . .

Ten years after starting Project Mayhem, he lives a mundane life. A kid, a wife. Pills to keep his destiny at bay. But it won't last long, the wife has seen to that. He's back where he started, but this go-round he's got more at stake than his own life.The time has arrived . . .Rize or Die.

New York Tomes bestselling novelist Chuck Palahniuk and acclaimed artist Cameron Stewart have collaborated for one of the most highly anticipated comic book and literary events of 2015--the return of Tyler Durden. The first rule of Fight Club 2 might be not to talk about it, but Fight Club 2 is generating international headlines and will introduce a new generation of readers to Project Mayhem.

Praise for the comics that comprise Fight Club 2-
"At turns deeply poignant and very funny, Palahniuk's freakish fables capture a twisted zeitgeist and add an oddly inspirational and subversive voice to the contemporary canon.... In the post-9/11 present, a hyperactive, Internet-obsessed, war- and recession-weary America apparently needs Tyler again."-THE ATLANTIC

"The book is fantastic, my highest recommendation.... Excellent work by Cameron Stewart and David Mack, and by our awesome friends at Dark Horse Comics."-Brian Michael Bendis

"If Tyler Durden needed a resurgence, there's no time like the present for his return... Fight Club 2 is a comic that taps back into everything great about the source material, and one that makes Tyler Durden's warm nihilistic embrace a welcome draw back into a familiar world of cynicism, violence, and anarchy...."Tyler Lives," and I couldn't be happier by the prospect of more bedlam."-NEWSARAMA

"Palahniuk is delivering a worthy sequel to his most beloved story."-THE NERDIST

"An amazing piece of work. You do not want to miss out on this."-COMICVINE

"We have a worthy sequel on our hands.... A must read."-COMICOSITY

"Cameron Stewart truly outdoes himself on every level in this book."-BLOODY DISGUSTING 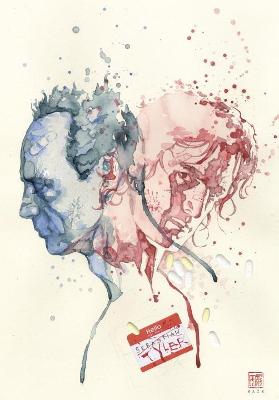 » Have you read this book? We'd like to know what you think about it - write a review about Fight Club 2 book by Cameron Stewart and you'll earn 50c in Boomerang Bucks loyalty dollars (you must be a Boomerang Books Account Holder - it's free to sign up and there are great benefits!)

Chuck Palahniuk's ten previous novels are the bestselling Fight Club, which was made into a film by David Fincher; Survivor; Invisible Monsters; Choke, which was made into a film by director Clark Gregg; Lullaby; Diary; Haunted; Rant; Snuff; and Pygmy. He is also the author of Fugitives and Refugees, a nonfiction profile of Portland, Oregon, published as part of the Crown Journeys series, and the nonfiction collection Stranger Than Fiction. He lives in the Pacific Northwest.