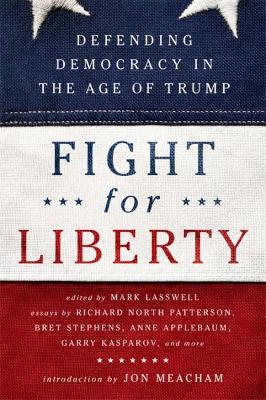 Fight for Liberty: Defending Democracy in the Age of Trump

Description - Fight for Liberty: Defending Democracy in the Age of Trump by Mark Lasswell

Liberal democracy is in crisis around the world, besieged by authoritarianism, nationalism, and other illiberal forces. Far-right parties are gaining traction in Europe, Vladimir Putin tightens his grip on Russia and undermines democracy abroad, and America struggles with poisonous threats from the right and left.But the defenders of democracy are strong too. Taking their cues from the 1788 Federalist Papers, the Renew Democracy Initiative is a collective of pro-democracy advocates from across the political spectrum, including Anne Applebaum, Garry Kasparov, Max Boot, Bret Stephens, Ted Koppel, and Natan Sharansky. This book is their foundational document, a collection of essays that analyze the multi-pronged threats to liberal democracy in the U.S. and abroad, and offer solutions based on fundamental democratic principles such as freedom of speech, a free press, and the rule of law.FIGHT FOR LIBERTY is a roadmap for the struggle against the rising tide of extremism and a cri de coeur in defense of the liberal world order, which sees itself threatened as never before today. ABOUT THE AUTHOR The Renew Democracy Initiative is a not-for-profit organization dedicated to the defense of democratic freedom and prosperity. Championing the values on which the free world was built, RDI seeks to unite the center-left and center-right by making the case for liberty, democracy and sanity in an age of discord. RDI aims to generate fresh thinking by convening the best minds from different countries in the service of liberty and democracy in the West and around the world.

Book Reviews - Fight for Liberty: Defending Democracy in the Age of Trump by Mark Lasswell

» Have you read this book? We'd like to know what you think about it - write a review about Fight for Liberty: Defending Democracy in the Age of Trump book by Mark Lasswell and you'll earn 50c in Boomerang Bucks loyalty dollars (you must be a Boomerang Books Account Holder - it's free to sign up and there are great benefits!)


A Preview for this title is currently not available.
More Books By Mark Lasswell
View All