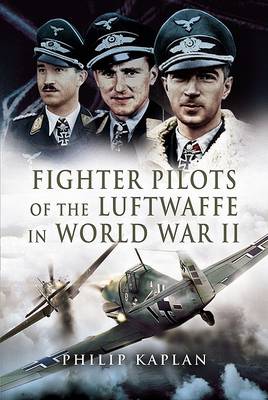 Fighter Aces of the Luftwaffe in World War 2

This book examines the reality behind the myths of the legendary German fighter aces of World War II. It explains why only a small minority of pilots - those in whom the desire for combat overrode everything - accounted for so large a proportion of the victories. It surveys the skills that a successful fighter pilot must have - a natural aptitude for flying, marksmanship, keen eyesight - and the way in which fighter tactics have developed. The book examines the history of the classic fighter aircraft that were flown, such as the Messerschmitt Bf 109 and the Focke Wulf Fw 190, and examines each type's characteristics, advantages and disadvantages in combat. The accounts of the experiences of fighter pilots are based on archival research, diaries, letters, published and unpublished memoirs and personal interviews with veterans. The pilots included are Werner Molders, Gunther Rall, Adolf Galland, Erich Hartmann and Johannes Steinhoff. AUTHOR: Philip Kaplan has written several books on the lives of fighting men in World War II. Five of These, The Few, Little Friends, Round the Clock, Fighter Pilot and Bombers were devoted to the experiences of aircrew. He has also written two classic accounts of warfare at sea, Wolfpack and Convoy, plus two soon to be published for Pen & Sword, Two Man Air Force and Big Wings.

» Have you read this book? We'd like to know what you think about it - write a review about Fighter Aces of the Luftwaffe in World War 2 book by Philip Kaplan and you'll earn 50c in Boomerang Bucks loyalty dollars (you must be a Boomerang Books Account Holder - it's free to sign up and there are great benefits!)


A Preview for this title is currently not available.
More Books By Philip Kaplan
View All