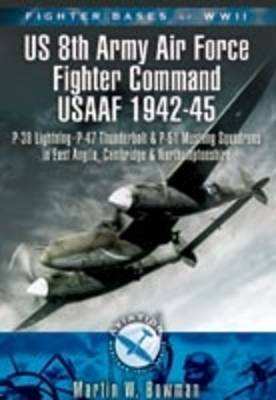 This book covers the bases used during the Second World War by the American fighter units that flew in support of the 8th Air Force's heavy bomber forces. The long-range Lightnings, Thunderbolts and Mustangs escorted the Mighty Eighth's Flying Fortresses and Liberators on their deep penetration raids into occupied Europe and Germany. Fighter cover was vital, since the USAAF flew daylight raids and in the early months the number of US aircraft lost to the defending Luftwuffe fighters was unacceptably high. The airfields included are Bodney, Bottisham, Boxted, Debden, Duxford, East Wretham, Fowlmere, Halesworth, Honington, Horsham St. Faith, King's Cliffe, Leiston, Martlesham Heath, Raydon, Steeple Morden, Wattisham and Wormingford. This book looks at the history and personalities associated with each base, what remains today and explores the favourite local wartime haunts where aircrew and ground crew would have sought well-deserved entertainment and relaxation. Other museums and places that are relevant will also be described and general directions on how to get them included. AUTHOR: Martin Bowman is one of Britain's leading aviation authors and has written many books on World War II aviation history. He lives in Norwich in Norfolk and intimately knows every place of interest within the locality. ILLUSTRATIONS: 80 illustrations

» Have you read this book? We'd like to know what you think about it - write a review about Fighter Bases of WW2 US 8th Army Air Force Fighter Command USAAF 1942-45 book by Martin Bowman and you'll earn 50c in Boomerang Bucks loyalty dollars (you must be a Boomerang Books Account Holder - it's free to sign up and there are great benefits!)