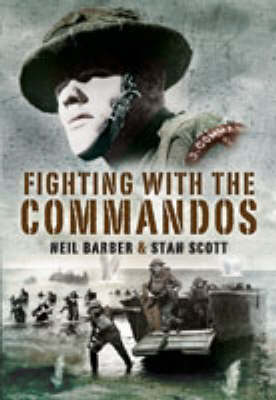 Fighting with the Commandos

Description - Fighting with the Commandos by Neil Barber

Fighting With The Commandos tells what the Second World War was like for a fighting soldier. After enlisting under-age, he was 'found out', joined the Home Guard and then a Young Soldiers Unit (for those too young to serve overseas). He managed to get out to Iraq but was again sent home. He then joined 3 Commando led by Brigadier Peter Young and landed on SWORD Beach on D-Day. He graphically describes the action thereafter which included being among the first to reach Pegasus Bridge and relieve the glider borne troops under Major John Howard. Plenty of excitement and danger were to follow and readers will revel in a no-holds-barred memoir which points an illuminating picture of life for the rank-and-file in the build-up to the climax of the war. SALES A first-hand account by a Commando who served in the frontlline with Brigadier Peter Young's elite 3 Commando. Landed on D-Day and in the thick of the action thereafter A true fighting man's memoir written with candour and humour AUTHOR Stan Scott lives in South East London Neil Barber who has helped Stan with his memoir is the author of The Day the Devils Dropped In.

Book Reviews - Fighting with the Commandos by Neil Barber

» Have you read this book? We'd like to know what you think about it - write a review about Fighting with the Commandos book by Neil Barber and you'll earn 50c in Boomerang Bucks loyalty dollars (you must be a Boomerang Books Account Holder - it's free to sign up and there are great benefits!)


A Preview for this title is currently not available.
More Books By Neil Barber
View All