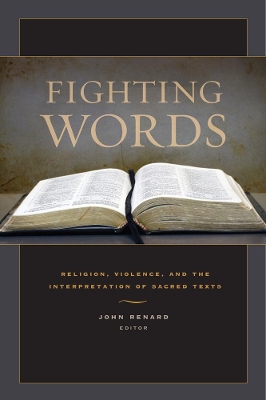 Religion, Violence, and the Interpretation of Sacred Texts

One of the critical issues in interreligious relations today is the connection, both actual and perceived, between sacred sources and the justification of violent acts as divinely mandated. Fighting Words makes solid text-based scholarship accessible to the general public, beginning with the premise that a balanced approach to religious pluralism in our world must build on a measured, well-informed response to the increasingly publicized and sensationalized association of terrorism and large-scale violence with religion.

In his introduction, Renard provides background on the major scriptures of seven religious traditions?Jewish, Christian (including both the Old and New Testaments), Islamic, Baha'i, Zoroastrian, Hindu, and Sikh. Eight chapters then explore the interpretation of select facets of these scriptures, focusing on those texts so often claimed, both historically and more recently, as inspiration and justification for every kind of violence, from individual assassination to mass murder. With its nuanced consideration of a complex topic, this book is not merely about the religious sanctioning of violence but also about diverse ways of reading sacred textual sources. » Have you read this book? We'd like to know what you think about it - write a review about Fighting Words book by John Renard and you'll earn 50c in Boomerang Bucks loyalty dollars (you must be a Boomerang Books Account Holder - it's free to sign up and there are great benefits!)

John Renard is Professor of Theological Studies at Saint Louis University. He is the author of many books, most recently Tales of God's Friends: Islamic Hagiography in Translation (UC Press).

A Preview for this title is currently not available.
More Books By John Renard
View All