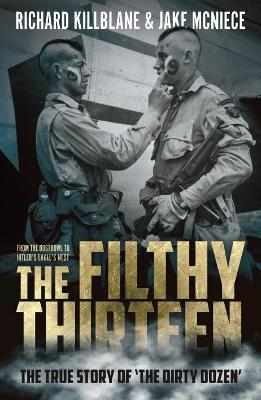 The True Story of the Dirty Dozen

Since World War II, the US 101st Airborne Division has achieved legendary status. But within the ranks of the 101st there existed a rougher, tougher and more ruthless unit whose formidable reputation has persisted over the decades to this day: the Filthy Thirteen. Hugely popular on first publication, this books tells of a brawling bunch of no-goodniks whose only saving grace was that they inflicted more damage on the Germans than on MPs, the English countryside and their own officers. AUTHORS: Jake McNiece, who despite making four combat jumps and displaying tremendous battlefield courage during the war, was consistently bumped back to the rank of private. On D-Day, they were assigned to take a bridge over the Douve River in France, a mission that would cost most of the men their lives. Sadly Jake passed away in early 2013. Richard E. Killblane was raised in Oklahoma where he came to know Jake Mc Niece. Richard graduated from the U.S. Military Academy in 1979 and earned his Master of Arts in history from the University of San Diego in 1992. He served as an officer in the infantry and Special Forces and attained the rank of Captain. He is a veteran of Central American counter-insurgency operations and Operation Just Cause (Panama) He is a published author and currently servesas the Transportation Corps historian. 16 pages of plates

Other Editions - The Filthy Thirteen by Jake McNiece » Have you read this book? We'd like to know what you think about it - write a review about Filthy Thirteen book by Jake McNiece and you'll earn 50c in Boomerang Bucks loyalty dollars (you must be a Boomerang Books Account Holder - it's free to sign up and there are great benefits!)


A Preview for this title is currently not available.
More Books By Jake McNiece
View All