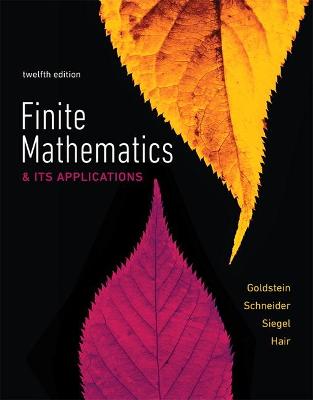 Finite Mathematics is a comprehensive yet flexible text for students majoring in business, economics, life science, or social sciences. Its varied and relevant applications are designed to pique and hold student interest, and the depth of coverage provides a solid foundation for students' future coursework and careers.

» Have you read this book? We'd like to know what you think about it - write a review about Finite Mathematics & Its Applications book by Larry Goldstein and you'll earn 50c in Boomerang Bucks loyalty dollars (you must be a Boomerang Books Account Holder - it's free to sign up and there are great benefits!)

Larry Goldstein has received several distinguished teaching awards, given more than fifty Conference and Colloquium talks & addresses, and written more than fifty books in math and computer programming. He received his PhD at Princeton and his BA and MA at the University of Pennsylvania. He also teaches part time at Drexel University. David Schneider, who is known widely for his tutorial software, holds a BA degree from Oberlin College and a PhD from MIT. He is currently an emeritus professor of mathematics at the University of Maryland. He has authored eight widely used math texts, fourteen highly acclaimed computer books, and three widely used mathematical software packages. He has also produced instructional videotapes at both the University of Maryland and the BBC. Martha Siegel holds a BA from Russell Sage College, attended Rensselaer Polytechnic Institute as a special student, and received her PhD at the University of Rochester. From 1966 until 1971 she taught at Goucher University in Baltimore. Since 1971 she has been a professor at Towson State University, also in Maryland. Professor Siegel has been on the writing team of this book since the fifth edition and is also the co-author of a precalculus reform book. Steven Hair holds a BS from Virginia Tech and a PhD from Penn State University. He is currently a lecturer and course coordinator at Penn State, where he develops traditional and digital content for finite math and precalculus courses. In his free time, Steven enjoys spending time with his family, playing the saxophone, and fly fishing.

A Preview for this title is currently not available.
More Books By Larry Goldstein
View All