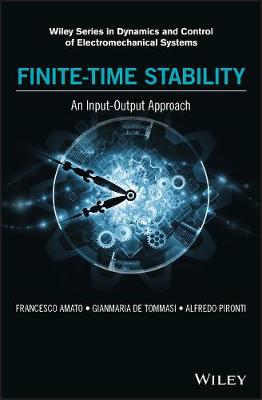 Input-output finite-time stability (IO-FTS) is a practical concept, useful to study the behavior of a dynamical system within a finite interval of time.

Computationally tractable conditions are provided that render the technique applicable to time-invariant as well as time varying and impulsive (i.e. switching) systems.

This book is essential reading for university researchers as well as post-graduate engineers practicing in the field of robust process control in research centers and industries. Topics dealt with in the book could also be taught at the level of advanced control courses for graduate students in the department of electrical and computer engineering, mechanical engineering, aeronautics and astronautics, and applied mathematics.

» Have you read this book? We'd like to know what you think about it - write a review about Finite-Time Stability: An Input-Output Approach book by Francesco Amato and you'll earn 50c in Boomerang Bucks loyalty dollars (you must be a Boomerang Books Account Holder - it's free to sign up and there are great benefits!)

Francesco Amato received a PhD Degree in Electronic Engineering from the University of Naples in 1994. From 2001 to 2003 he was Professor of Automatic Control at the University of Reggio Calabria. In 2003 he moved to the University of Catanzaro, where, since 2010, he is Professor of Bioengineering. He is currently the Dean of the School of Computer and Biomedical Engineering and the Coordinator of the Doctorate School in Biomedical and Computer Engineering. The scientific activity of Francesco Amato has developed in the fields of systems and control theory, robust control, finite-time stability and control, control of nonlinear quadratic systems, with applications to the contexts of aircraft control, computational biology and bioengineering. He has published about 250 papers in international journals and conference proceedings and two monographs with Springer Verlag entitled "Robust Control of Linear Systems subject to Uncertain Time-Varying Parameters" and "Finite-Time Stability and Control". Gianmaria De Tommasi received a Research Doctorate degree in computer and automatic engineering from the University of Naples Federico II, Italy, in 2005. He is currently Associate Professor with the Department of Electrical Engineering and Information Technology, University of Naples Federico II. Since 2002, he has been a Visiting Researcher with the Joint European Torus (JET) Tokamak, Oxfordshire, U.K., where he has participated to various projects connected to the JET plasma current and shape control system. He has authored more than 100 journal and conference papers, and is a co-author of the monography titled Finite-Time Stability and Control (Springer). His current research interests include control of nuclear fusion devices, fault detection for discrete event systems, identification of discrete event systems modeled with Petri nets, and stability on finite-time horizon of hybrid systems. Dr. De Tommasi is a member of the IEEE Control System Society Conference Editorial Board, and has been a Guest Editor of the Fusion Engineering and Design special issue titled Design and Implementation of Real-Time Systems for Magnetic Confined Fusion Devices. Alfredo Pironti received a PhD in Electronic and Computing Engineering from the University of Naples Federico II in 1995. Since 1991 he has worked at the University of Naples Federico II, where he currently is a Full Professor of System and Control Theory in the Department of Electrical and Information Technology Engineering. He has spent several periods as visiting researcher at the Max Planck Institute for Plasma Physics in Garching (Germany), the Center for Control Engineering and Computation (University of California at Santa Barbara), the ITER Joint Work Site of Naka (Japan), and the EFDA-JET site of Culham (UK). His research interests include application of feedback control to nuclear fusion problems, robust control of uncertain systems, and differential games theory. In 2005 Alfredo Pironti was guest editor for the IEEE Control Systems Magazine journal, where he contributed to two special issues focused on the control of plasmas in tokamak machines. He is author of more than 200 papers published on international journals, books, and conference proceedings.

A Preview for this title is currently not available.
More Books By Francesco Amato
View All