SHORTLISTED FOR THE WILLIAM HILL SPORTS BOOK OF THE YEAR AWARD

'I doubt there will be a better book written about this period in West Indies cricket history.'
Clive Lloyd

The West Indies had always had brilliant cricketers; it hadn't always had brilliant cricket teams. But in 1974, a man called Clive Lloyd began to lead a side which would at last throw off the shackles that had hindered the region for centuries. Nowhere else had a game been so closely connected to a people's past and their future hopes; nowhere else did cricket liberate a people like it did in the Caribbean.

For almost two decades, Clive Lloyd and then Vivian Richards led the batsmen and bowlers who changed the way cricket was played and changed the way a whole nation - which existed only on a cricket pitch - saw itself.

With their pace like fire and their scorching batting, these sons of cane-cutters and fishermen brought pride to a people which had been stifled by 300 years of slavery, empire and colonialism. Their cricket roused the Caribbean and antagonised the game's traditionalists.

Told by the men who made it happen and the people who watched it unfold, Fire in Babylon is the definitive story of the greatest team that sport has known.

Other Editions - Fire in Babylon by Simon Lister 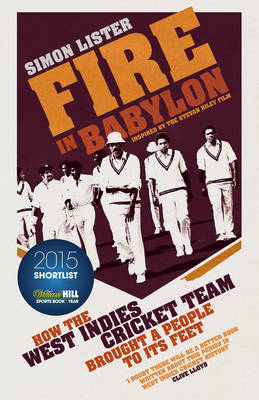 » Have you read this book? We'd like to know what you think about it - write a review about Fire in Babylon book by Simon Lister and you'll earn 50c in Boomerang Bucks loyalty dollars (you must be a Boomerang Books Account Holder - it's free to sign up and there are great benefits!)

Simon Lister is a cricket writer and senior BBC news producer. His first book, Supercat - the authorised biography of Clive Lloyd - was short-listed for the British Sports Book of the Year award. It was, said the Guardian, 'beautifully written'. He has been a contributor to the Wisden Cricketers' Almanack and has covered the county game for the Sunday Telegraph. For ten years, his magazine column, Eyewitness, appeared in The Wisden Cricketer and its successor The Cricketer.

A Preview for this title is currently not available.
More Books By Simon Lister
View All