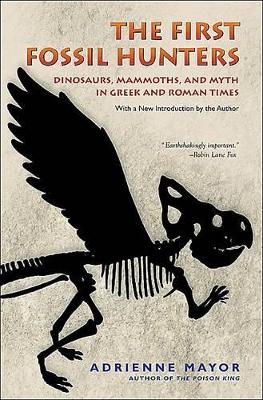 Griffins, Cyclopes, Monsters, and Giants--these fabulous creatures of classical mythology continue to live in the modern imagination through the vivid accounts that have come down to us from the ancient Greeks and Romans. But what if these beings were more than merely fictions? What if monstrous creatures once roamed the earth in the very places where their legends first arose? This is the arresting and original thesis that Adrienne Mayor explores in The First Fossil Hunters. Through careful research and meticulous documentation, she convincingly shows that many of the giants and monsters of myth did have a basis in fact--in the enormous bones of long-extinct species that were once abundant in the lands of the Greeks and Romans. As Mayor shows, the Greeks and Romans were well aware that a different breed of creatures once inhabited their lands. They frequently encountered the fossilized bones of these primeval beings, and they developed sophisticated concepts to explain the fossil evidence, concepts that were expressed in mythological stories. The legend of the gold-guarding griffin, for example, sprang from tales first told by Scythian gold-miners, who, passing through the Gobi Desert at the foot of the Altai Mountains, encountered the skeletons of Protoceratops and other dinosaurs that littered the ground. Like their modern counterparts, the ancient fossil hunters collected and measured impressive petrified remains and displayed them in temples and museums; they attempted to reconstruct the appearance of these prehistoric creatures and to explain their extinction. Long thought to be fantasy, the remarkably detailed and perceptive Greek and Roman accounts of giant bone finds were actually based on solid paleontological facts. By reading these neglected narratives for the first time in the light of modern scientific discoveries, Adrienne Mayor illuminates a lost world of ancient paleontology.

» Have you read this book? We'd like to know what you think about it - write a review about First Fossil Hunters book by Adrienne Mayor and you'll earn 50c in Boomerang Bucks loyalty dollars (you must be a Boomerang Books Account Holder - it's free to sign up and there are great benefits!)

Adrienne Mayor is the author of "Fossil Legends of the First Americans"; "Greek Fire, Poison Arrows, and Scorpion Bombs"; and "The Poison King", which was a finalist for a National Book Award in 2009. She is a research scholar in classics and history of science at Stanford University.

A Preview for this title is currently not available.
More Books By Adrienne Mayor
View All