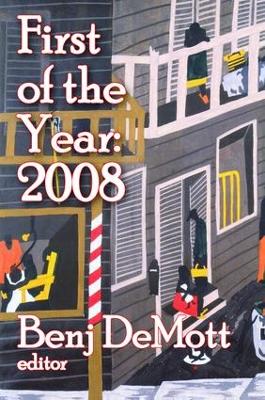 Description - First of the Year: 2008 by Benj DeMott

This is the first in a continuing series of reminders that the past informs the present as it infuses the future. As Benj DeMott notes, the aim of First of the Year is to define "the democratic imperatives and demotic tones that make our ongoing politics of culture matter." This annual publication is grounded in the needs of "dissed" people: disenfranchised, disadvantaged, disinherited, discomfited, and dismissed. But the concept has been sharpened to acknowledge that though the underdog is owed sympathy, the mad dog is owed a bullet. In short, First of the Year is very much an effort of the twenty-first century.

The publication aims to be more than a launching pad for writers. It attempts to bridge the gap between radical perspectives without losing focus on the centrality of African-American culture to the national conversation. The coming together of figures like Armond White, Kate Millett, Lorenzo Thomas, Russell Jacoby, Adolph Reed, and Amiri Baraka is quite unlike what can be found in standard literary and social publications. They treat the African-American condition as a policy issue or an executive summary report--not as a touchstone for the state of the nation as a whole.

The initial volume also deals extensively and seriously with the issue of humanism and terror, the nature of social movements, electoral and urban politics, and the musical trends of our time. It does so with a sense of urgency often denied in mainstream literary reviews. Issues of "standards" are addressed from the angle of African-American cultural traditions, and the mind-body problem as a matter of race not just of metaphysics. In a nutshell, this volume intends to open a new chapter in the Harlem Renaissance; or better, an American renaissance with a Harlem lilt. First of the Year is an attempt to make political arguments breathe through cultural voices. Contributors include Sheldon Wolin, Jean Bethke Elshtain, Kurt Vonnegut, Paul Berman, Charles Keil, and Philip Levine, among others, ensuring its ability to entertain.

Other Editions - First of the Year: 2008 by Benj DeMott 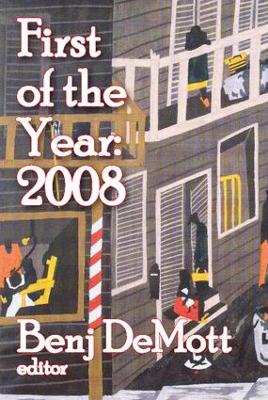 » Have you read this book? We'd like to know what you think about it - write a review about First of the Year: 2008 book by Benj DeMott and you'll earn 50c in Boomerang Bucks loyalty dollars (you must be a Boomerang Books Account Holder - it's free to sign up and there are great benefits!)


A Preview for this title is currently not available.
More Books By Benj DeMott
View All