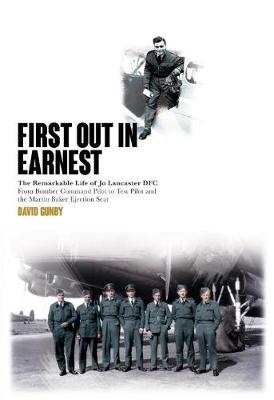 First out in Earnest

Description - First out in Earnest by David Gunby

The remarkable career of Bomber Command and Test Pilot Jo Lancaster DFC, the first man to use the Martin Baker ejection seat in an emergency. John Oliver (Jo) Lancaster DFC had a remarkable career in aviation spanning half a century. Starting out in 1935 as an engineering apprentice with Armstrong Whitworth Jo went on to fly an extraordinary 54 operations against the enemy during the Second World War, piloting Vickers Wellingtons and Avro Lancasters with RAF Bomber Command's 40 and 12 Squadrons. Jo also took part in the 'Thousand Bomber Raids' in 1942 while an instructor at an operational training unit. Subsequently Jo was posted to the Aeroplane and Armament Experimental Establishment at Boscombe Down, during which he flew a wide range of types, including captured German aircraft, and this was followed by training at the Empire Test Pilots' School. Post-war Jo took up numerous appointments as a test pilot including duties with Boulton Paul and Saunders-Roe, where he test flew the revolutionary Saro S.R. A/1 single-seat jet flying boat fighter. On 30 May 1949, while carrying out test pilot duties with Armstrong Whitworth, Jo was flying the A.W. 52 Flying Wing and became the first pilot to use a Martin-Baker ejection seat in an emergency. Retiring as a test pilot in 1962, Jo was later involved in aerial crop spraying in the Middle East before becoming Aviation Manager for Meridian Air Maps, carrying out aerial survey work from the West Indies to Central Africa and Portugal to Cyprus. By retirement in 1984 Jo had accumulated 11,000 flying hours on some 150 different aircraft types. AUTHOR: David Gunby, through extensive interviews and correspondence with Jo, and complimented with diligent archive research, has written a highly detailed account of this outstanding aviator. 'First Out in Earnest', featuring numerous previously unpublished photographs, is the remarkable account of a life dedicated to flying by one of the rapidly diminishing number of survivors from the golden age in British aviation. 30 illustrations

Book Reviews - First out in Earnest by David Gunby

» Have you read this book? We'd like to know what you think about it - write a review about First out in Earnest book by David Gunby and you'll earn 50c in Boomerang Bucks loyalty dollars (you must be a Boomerang Books Account Holder - it's free to sign up and there are great benefits!)

David Gunby was, before retirement, Professor of English Literature at the University of Canterbury, Christchurch, New Zealand, specializing in Renaissance drama and poetry. He also has a life-long interest in military aviation, and particularly in Royal Air Force bomber operations, this originating in his father's service with 40 Squadron, the history of which was published in 1995 as Sweeping the Skies. He met Jo Lancaster, whose first tour of operations was with 40 Squadron, while researching the squadron history, and later persuaded him to record his memories of a long and distinguished career in aviation, now the basis of this biography.

A Preview for this title is currently not available.
More Books By David Gunby
View All