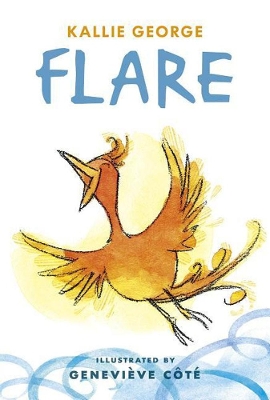 Flare is a tough little phoenix. He never cries. But everyone needs to cry sometimes. Will his guardians, Sun, Wind and Cloud, find a way to show him how? The second book in the Tiny Tails series provides comforting reassurance that it's okay to express our emotions.

» Have you read this book? We'd like to know what you think about it - write a review about Flare book by Kallie George and you'll earn 50c in Boomerang Bucks loyalty dollars (you must be a Boomerang Books Account Holder - it's free to sign up and there are great benefits!)

Kallie George is an author and editor living in Vancouver, BC. She completed her Masters of Children s Literature at the University of British Columbia in 2007. She is the co-creator of a series of acclaimed board books, the Simply Small Series, by Paola Opal, author of the art book Mr. M the Exploring Dreamer with art by Soizick Meister, and the author of the picture book, The Melancholic Mermaid illustrated by Abigail Halpin. Her most recent project, Clover's Luck, Book 1 in the Magical Animal Adoption series, will be published in Summer 2014, by Disney-Hyperion. When she is not writing or editing, she s teaching creative writing workshops through Capilano University and CWC (Creative Writing for Children). www.kalliegeorge.com Genevieve Cote has illustrated several books over the years, such as The Lady of Shalott by Tennyson, Wishes by Jean Little, Ella May and the Wishing Stone, by Cary Fagan, The Little Word Catcher by Danielle Simard, and many more. She has also written, in both english and french, a few stories of her own: Mr. King s Things, Without You, Me and You, What Elephant? and With You always, Little Monday . Her editorial art has appeared in the New York Times, The Wall Street Journal, l Actualite and other such publications. She has won the Elizabeth Mrazik-Cleaver Award in 2005, the General Governor s Award for Illustration in 2007, and the Marilyn Baillie Award in 2012. She lives in Montreal, Quebec. genevievecoteillustration.com"