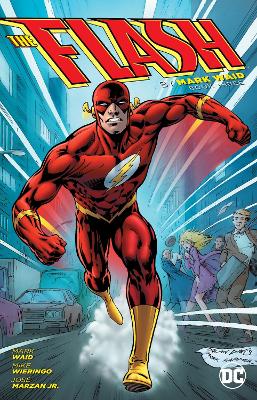 Superstar writer Mark Waid's run on THE FLASH is now re-collected in a new series of graphic novels, continuing in THE FLASH BY MARK WAID BOOK THREE!

» Have you read this book? We'd like to know what you think about it - write a review about Flash By Mark Waid Book Three book by Mark Waid and you'll earn 50c in Boomerang Bucks loyalty dollars (you must be a Boomerang Books Account Holder - it's free to sign up and there are great benefits!)

Born in Hueytown, Alabama, Mark Waid has earned his living as a lounge singer, a magician, a disc jockey, an accountant and in many other ways, but none of them as eclectic--or fun--as scripting comic books. Waid has written for every major comics publisher, including Marvel Comics, Archie (where he served briefly as their cover-gag editor), Dark Horse, Image, DC Comics and Top Cow. His credits include X-MEN, FLASH, JLA, RUSE, FANTASTIC FOUR, the best-seller KINGDOM COME, his creator-owned series EMPIRE and the Top Cow breakout hit HUNTER-KILLER.

A Preview for this title is currently not available.
More Books By Mark Waid
View All