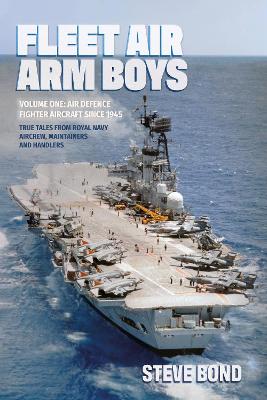 The RAF's continuing role in the projection of air power in the defence of the United Kingdom and its overseas interests since the end of the Second World War is well known. However, the same cannot always be said about the Royal Navy's Fleet Air Arm (FAA), in part due to the ten-year gap between the retirement of the Harrier and the arrival of the F-35B and the Queen Elizabeth-class aircraft carriers. Flying high performance aircraft off a carrier demands not only a high level of skill, but also a considerable amount of courage and determination, not least to land back on a very small piece of real estate bobbing about in a rough sea, often at night, with no possibility of diversion. The nature of these operations has meant that the accident rate and aircrew losses were very high - and accepted as part of the job. With the arrival of the Queen Elizabeth and the Prince of Wales, it is time to redress the balance and bring the FAA's extraordinary story to the audience it so richly deserves through the words of those air and ground crews who have been part of it since 1945. What emerges is an amazing close-knit esprit de corps, often accompanied by a long-standing and still simmering rivalry between the RAF and the Royal Navy over who should project air power overseas. Enormous respect is shown by the aviators and ships' senior officers for the aircraft handlers and maintainers, who work long hours in a highly dangerous environment on the flight deck. This first volume looks chronologically at every aircraft type flown in an air defence role since 1945. Involvement in conflicts including Korea, Suez, the Falklands, Bosnia and elsewhere is included, and perforce the cost in human lives, even in everyday operations, frequently emerges. Balancing this are the everyday grind, the good times, the humour, the 'runs ashore' and the sense of pride in a job well done. All delivered in the words of the men themselves. AUTHOR: Dr Steve Bond is a life-long aviation professional and historian. He served in the Royal Air Force for twenty-two years as an aircraft propulsion technician, with tours on many different aircraft, and was part of the Eurofighter Typhoon project team in the MoD. A fellow of the Royal Aeronautical Society, he is also the author of many magazine articles and books including: Heroes All, Special Ops Liberators (with Richard Forder), Wimpy, Meteor Boys and Javelin Boys for Grub Street.

» Have you read this book? We'd like to know what you think about it - write a review about Fleet Air Arm Boys Volume One: Air Defence Fighter Aircraft Since 1945 book by Steve Bond and you'll earn 50c in Boomerang Bucks loyalty dollars (you must be a Boomerang Books Account Holder - it's free to sign up and there are great benefits!)