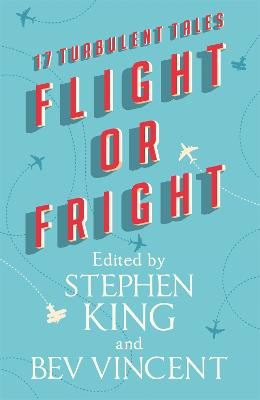 Fasten your seatbelts for an anthology of turbulent tales curated by Stephen King and Bev Vincent.This exciting new collection, perfect for airport or aeroplane reading, includes an original introduction and story notes for each story by Stephen King, and brand new stories from Stephen King and Joe Hill.Stephen King hates to fly.Now he and co-editor Bev Vincent would like to share this fear of flying with you.Welcome to FLIGHT OR FRIGHT, an anthology about all the things that can go horribly wrong when you're suspended six miles in the air, hurtling through space at more than 500 mph and sealed up in a metal tube (like - gulp! - a coffin) with hundreds of strangers. All the ways your trip into the friendly skies can turn into a nightmare, including some we'll bet you've never thought of before... but now you will the next time you walk down the jetway and place your fate in the hands of a total stranger.Featuring brand new stories by Joe Hill and Stephen King, as well as fourteen classic tales and one poem from the likes of Richard Matheson, Ray Bradbury, Roald Dahl, Dan Simmons, and many others, Flight or Fright is, as King says, "ideal airplane reading, especially on stormy descents... Even if you are safe on the ground, you might want to buckle up nice and tight."Book a flight for this terrifying new anthology that will have you thinking twice about how you want to reach your final destination.Table of Contents:Introduction by Stephen KingCargo by E. Michael LewisThe Horror of the Heights by Sir Arthur Conan DoyleNightmare at 20,000 Feet by Richard MathesonThe Flying Machine by Ambrose BierceLucifer! by E.C. TubbThe Fifth Category by Tom BissellTwo Minutes Forty-Five Seconds by Dan SimmonsDiablitos by Cody GoodfellowAir Raid by John VarleyYou Are Released by Joe HillWarbirds by David J. SchowThe Flying Machine by Ray BradburyZombies on a Plane by Bev VincentThey Shall Not Grow Old by Roald DahlMurder in the Air by Peter TremayneThe Turbulence Expert by Stephen KingFalling by James L. DickeyAfterword by Bev Vincent » Have you read this book? We'd like to know what you think about it - write a review about Flight or Fright: 17 Turbulent Tales Edited by Stephen King and Bev Vincent book by Stephen King and you'll earn 50c in Boomerang Bucks loyalty dollars (you must be a Boomerang Books Account Holder - it's free to sign up and there are great benefits!)


A Preview for this title is currently not available.
More Books By Stephen King
View All