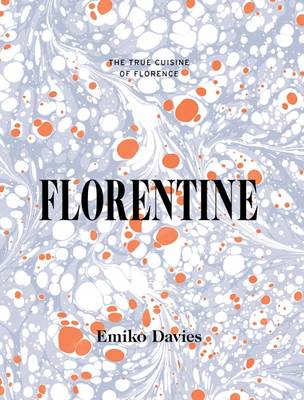 The True Cuisine of Florence Hardback

Florentine is a collection of recipes and photographs from Tuscany's capital. Emiko Davies draws on her lived experience of traditional Florentine cuisine to share recipes that transport readers to the piazzas of Florence. From her torta di mele - a reassuringly nonna-esque apple cake - to ravioli pera e ricotta - mouthwateringly buttery pear and ricotta ravioloni - allow yourself to be taken on a culinary tour through the city. Florentine is a unique stroll through the city's streets, past pastry shops bustling with espresso-sippers, hole-in-the-wall wine bars, busy food vans and lunchtime trattorias, to reveal why the people of Florence remain proudly attached to their unchanging cuisine - a cuisine that tells the unique story of its city, dish by dish. From the morning ritual of la pasticceria (the pastry shop) and il forno (the bakery), the tantalising fresh produce of il mercato (the market) and il maccellaio (the butcher) through to the romance of la trattoria, Davies expertly guides food lovers through the Renaissance city. Be swept up in the atmosphere of Florence's street food scene with a few bites of crunchy crostini with fig compote and prosciutto, or savour a silky gelato of hazelnut and crema.
With a nod to Florence's rich history, Florentine offers some much-loved traditional dishes, such as schiacciata fiorentina (orange and vanilla cake), apricot jam crostata (apricot jam pie), piselli alla fiorentina (peas cooked in tomato sauce) and cinghiale con le olive (stewed wild boar with olives). Seasons and long-held food traditions play an important role in the Tuscan kitchen and this is reflected in every Florentine menu, bakery window or market stall.

Davies says that one of the things living in Tuscany has taught her is that there is no such thing as Italian cuisine; rather, Florentine is about offering readers a local's perspective on one of the country's 20 regional cuisines. In this case, the one that has won her heart.

Other Editions - Florentine by Emiko Davies 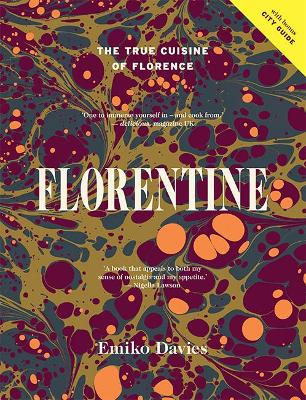 » Have you read this book? We'd like to know what you think about it - write a review about Florentine book by Emiko Davies and you'll earn 50c in Boomerang Bucks loyalty dollars (you must be a Boomerang Books Account Holder - it's free to sign up and there are great benefits!)

After growing up in an international household - she spent eight childhood/teen years living in Beijing, China, with her Japanese mother and Australian father - it was perhaps inevitable that Emiko Davies would find herself halfway around the world later in life. She first visited Florence while studying at Rhode Island School of Design in Providence, Rhode Island (where she subsequently graduated with a Fine Arts degree in printmaking). On her first visit to Italy as part of a semester abroad arrangement, 21-year-old Davies arrived at Santa Maria Novella station with nothing but a suitcase and some broken Italian. Captivated by the country's culture and beauty, she returned four years later as the recipient of an Italian government scholarship to study art restoration. She also met and fell in love with handsome local sommelier Marco Lami - in her words, her ideal gastronomic partner in crime. Regional Italian cuisine won her affections, too (her favourite dishes include the eggless milk pudding dessert biancomangiare, and baby octopus soup). Davies began her now five-year-old blog www.emikodavies.com while living in Florence as a way to tell a story that she had become increasingly fascinated with: about Tuscan food, its history and almost strict adherence to traditions. But after seven years in Florence, with the economic crisis setting deep in Italy, she and Lami decided to move to Australia - first to Melbourne, where now two-year-old Mariu was born, then Canberra to be with family. During this time, Davies focused on her writing (including the major coup of a weekly column on regional Italian food for popular New York-based website Food52), and Lami worked for some of the country's top restaurateurs, including Andrew McConnell and Neil Perry. Italy's pull proved too strong, however, and the couple relocated there indefinitely with their daughter in March 2015. Lami, whose family are from the town of Fucecchio in the greater province of Florence, has taken a seasonal job as head sommelier at Michelin-starred Il Pellicano at a resort on an island in southern Tuscany. And Davies will continue her writing from there, including a new biweekly column for Italian newspaper Corriere della Sera. The theme of the Cucina Corriere blog is classic Italian cookbooks - essentially she shares often forgotten jewels from classic, sometimes historic, Italian cookbooks. Food52 co-founder Amanda Hesser (also editor of The Essential New York Times Cookbook) calls Davies a "renaissance woman for the internet era". Anyone familiar with Davies' blog will know those words to be true: in addition to her formidable cooking and writing talents, Davies is an accomplished photographer and illustrator. Florentine is set to be a stunning showcase for each of those talents.

A Preview for this title is currently not available.
More Books By Emiko Davies
View All

Tortellini at Midnight: and other heirloom family recipes from Taranto to Turin to Tuscany
$43.16 $52.00