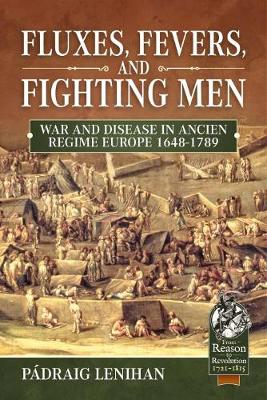 The proportion of wartime soldiers dying of disease as against combat injury, ran at about 70-75 percent in armies campaigning in Europe in the century and a half (1648-1789) between the end of the Thirty Years War and the French Revolution. During this time, field armies doubled in size and regimes usually fought for limited territorial gains, so it was safest to 'occupy, entrench, and wait'. Consequently, this was an era of massive and protracted encampments: the Christian army that sat down before Belgrade in 1717 had more mouths than any city within 500 miles, but lacked basic urban amenities like regular markets, wells, privy pits, and night soil collectors. Yet the impact of sickness on military operations has been neglected. This study uncovers how many soldiers sickened and died by consulting quantitative data, such as casualty returns and hospital registers, generated by the new state-contract armies which displaced the mercenary hordes of the Thirty Years' War. As plague began to recede from Europe, this study explains what exactly were these 'fluxes and fevers' that remained to afflict European armies in wartime and argues that they formed a single seasonal continuum that peaked in late summer. The isolation and incarceration of the military hospital characterised the response of the new armies to 'disorder' and to revivified notions of contagion. However, the hospital often prolonged the late summer morbidity/mortality spike into mid-winter by generating 'hospital fever' or typhus, the lice-borne disease that erupted whenever the cold, wet, hungry, transient, and unwashed huddled together. The cure was the disease. This scope of the study includes French army operations in some of its contiguous campaigning theatres, north Italy (1702 and 1734), the Rhineland (1734), Roussillon (1674), possibly Catalonia (1693), and, further afield, Bohemia (1742). The study also includes three case-studies involving the British army that include Ireland (1689), Portugal (1762), Dutch Brabant (1748), and the Rhineland (1743). The outliers are studies of Habsburg operations in and around Belgrade (1717 and 1737), and Russian operations in Crimea (1736). 30 b/w maps and graphs

» Have you read this book? We'd like to know what you think about it - write a review about Fluxes, Fevers and Fighting Men: War and Disease in Ancien Regime Europe 1648-1789 book by Padraig Lenihan and you'll earn 50c in Boomerang Bucks loyalty dollars (you must be a Boomerang Books Account Holder - it's free to sign up and there are great benefits!)


A Preview for this title is currently not available.
More Books By Padraig Lenihan
View All