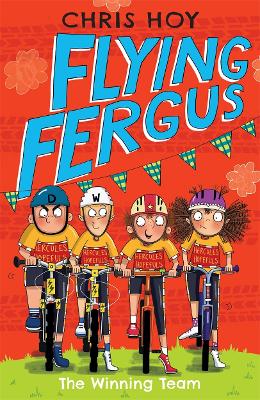 The Hercules Hopefuls are through to the final round of the cycling competition, but are facing their toughest test yet - not only must Fergus and his friends beat their arch-rivals Wallace's Winners, but this time they also need to face off against the scariest team in all of Scotland - The Velociraptors, an elite all-girls squad. But disaster strikes the team when Minnie McCloud catches chicken pox and Calamity Coogan breaks his leg, and it looks like their dreams are over. But Wallace's Winners are also in a predicament - can Wesley and Fergus put their rivalry to one side and give both teams a chance at lifting the cup?

Meanwhile, in Nevermore, Fergus must work together with Princess Lily and his friends to save his dad from the clutches of the mean anti-cycling King Woebegot. If he can just manage it, maybe Dad will be back home in time to see him compete in the Finals?

» Have you read this book? We'd like to know what you think about it - write a review about Flying Fergus 5: The Winning Team book by Sir Chris Hoy and you'll earn 50c in Boomerang Bucks loyalty dollars (you must be a Boomerang Books Account Holder - it's free to sign up and there are great benefits!)

Sir Chris Hoy MBE was born and raised in Edinburgh. He raced BMX until he was 14. Chris won his first world medal in 1999 - a silver in the Team Sprint - and has won 11 world and two Commonwealth titles to date. Chris won his first Olympic gold medal in Athens in 2004 and went on to win three gold medals at the Beijing Olympics. In 2012 at his home Olympic Games in London, Chris won his fifth and sixth gold medals- in the Keirin and Team Sprint- becoming Great Britain's most successful Olympic athlete of all time with six gold medals and one silver. Chris was voted BBC Sports Personality of the Year in 2008 and awarded a Knighthood in 2009. Follow Chris at www.chrishoy.com or on Twitter: @chrishoy Joanna Nadin is the author of more than 30 books for children and young people. She has been shortlisted for the Roald Dahl Funny Prize and is a former broadcast journalist and Special Adviser to the Prime Minister. She lives in Bath. Follow Joanna at www.joannanadin.com on Twitter: @joannanadin