Amateur jockey Lord Henry Grey decides on a whim to join the bloodstock market, transporting racehorses around the world. And when he meets the glamorous Gabriella in Italy, he is sure he's hit the good life.That is, until a horse unexpectedly dies in transit and a colleague vanishes.Then Grey discovers that both his predecessors also went missing in curious cirmcumstances - and begins to doubt the wisdom of his career change.Either he turns detective or his own disappearance could be next . . . 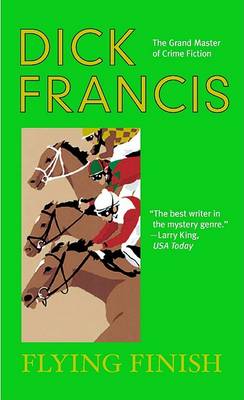 » Have you read this book? We'd like to know what you think about it - write a review about Flying Finish book by Dick Francis and you'll earn 50c in Boomerang Bucks loyalty dollars (you must be a Boomerang Books Account Holder - it's free to sign up and there are great benefits!)