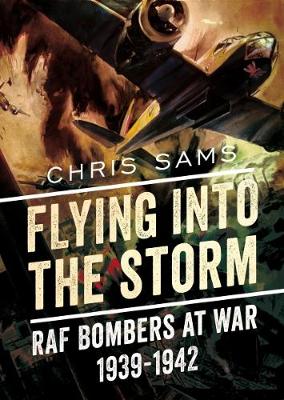 Flying into the Storm

Description - Flying into the Storm by Chris Sams

From the lessons of the First World War, the RAF developed a fleet of modern monoplane aircraft in time for hostilities in 1939; a force that consisted of Hampdens, Whitleys, Wellingtons, Blenheims, and Battles. These aircraft and their crews were pitted against the German war machine from day one-flying into storms of flak shells and swarms of Messerschmitt fighters in their flimsy, and often poorly armed, bombers. From theatres as far apart as Norway and Syria, Java and France, the crews and their aircraft were at the front of every military operation without adequate fighter escorts and with poor equipment against stiff opposition. They were the few who bravely went on 'one way ticket' missions, that saw operational life expectancy as only a matter of hours, without hesitation or complaint.

Book Reviews - Flying into the Storm by Chris Sams

» Have you read this book? We'd like to know what you think about it - write a review about Flying into the Storm book by Chris Sams and you'll earn 50c in Boomerang Bucks loyalty dollars (you must be a Boomerang Books Account Holder - it's free to sign up and there are great benefits!)

Chris Sams was born in Gillingham, Kent, and studied History at King Alfred's College, where he specialised in the Luftwaffe and the Axis powers at war. He is an avid researcher, and spends a lot of time assisting people with war related genealogical enquiries. In his spare time, he likes to spend time with his family, and drag them to boring historical remains and fortifications around Kent and London. This is his second book.

A Preview for this title is currently not available.
More Books By Chris Sams
View All