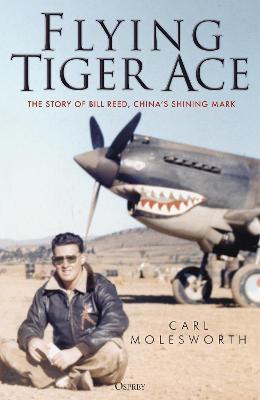 Bill Reed had it all - brains, looks, athleticism, courage and a talent for leadership. After a challenging childhood in Depression-era Iowa, Reed joined the US Army Air Corps, but the outbreak of World War II saw him give up his commission. Instead, he travelled to China to fly for the American Volunteer Group - the legendary Flying Tigers. After a brief return to America, he resumed the fight as a senior pilot and later squadron commander in the Chinese-American Composite Wing. Soon afterwards, Reed tragically lost his life in a desperate parachute jump late in the war, by which point he was a fighter ace with nine confirmed aerial victories. His obituary was front-page news throughout the state of Iowa.
This book is a biography of his extraordinary life, focusing on his time spent flying with some of the famous aerial groups of World War II. It draws heavily on Reed's own words, along with the author's deep knowledge of the China air war and years of research into Reed's life, to tell his compelling story.

» Have you read this book? We'd like to know what you think about it - write a review about Flying Tiger Ace: The story of Bill Reed, China's Shining Mark book by Carl Molesworth and you'll earn 50c in Boomerang Bucks loyalty dollars (you must be a Boomerang Books Account Holder - it's free to sign up and there are great benefits!)


A Preview for this title is currently not available.
More Books By Carl Molesworth
View All