Do you wish you could feel closer and more connected to your mom, dad, or other family members? Do you have a family member who served in the military, who perhaps saw war, and wondered what their experience was really like. Do you suspect there are traumas in their past that might be affecting their ability to open up? If yes, Flying with Dad will be an eye-opening read.

At 10, she thought Dad's bite was worse than his bark.

At 20, they fought about race.

At 60, she struggled to talk with him about what mattered.

In Flying With Dad, Yvonne Caputo charts her journey to her father through the re-telling of why he went from repairing to flying planes, how heavy German flak led to post-war nightmares, and why he suffered guilt over one particular bombing run.

As she learned to meet him where he was, instead of where she wanted him to be, the result was an intimacy, a deep abiding respect, and a no-regrets final goodbye.

Even after his death, Yvonne's relationship with this ordinary and extraordinary man continues to blossom: in the milky vapor trails in the sky, the blooms of the Christmas Cactus, and the Blue Jay that appears just as she thinks of another question she'd like to ask her dad.

A DAUGHTER. A FATHER. AND THE HIDDEN GIFTS IN HIS STORIES FROM WORLD WAR II.

Flying with Dad is the moving story of a daughter striving to understand her father and him sharing his harrowing experiences with her as a B-24 navigator in WWII.

Yvonne Caputo's remarkable, extended 'interview' of her late father, World War II B-24 Navigator Captain Michael Caputo, is a nuanced and authentic window on one man's personal experience of combat. Beyond enriching the historical record, father and daughter offer welcome insight on the veteran's humility and stoicism, and how character framed the combatant's experience of mortal adversity but is also forever changed by it.

Brian Mahoney, World War II researcher and co-author of Reluctant Witness: Memoirs for the Last Year of the European Airwar 1944- 1945

What grabs you in this engrossing family saga is the fierce connection forged slowly between father and daughter -- a long, solo journey of small steps carried out with sensitivity and guts. Captivating! The man who loved a good story would appreciate what his daughter has done in Flying with Dad -- as readers will too.

Having worked with thousands of clients who long for even one deep conversation with their parent, grandparent, or uncle about their World War II experience, this book will feel very relatable. For anyone who had a difficult relationship with their silent generation dad, this will be a comfortable and comforting read. If you're lucky enough to have a World War II relative still living, this might give you the courage to ask the questions you've been wanting to ask.

William L. (Bill) Beigel, author of Buried on the Battlefield: Not My Boy

For anyone who has an interest in the events leading up to and including World War II and beyond, this superb book is a must read. Yvonne Caputo brings everything to life in this very moving story.

Other Editions - Flying With Dad by Yvonne Caputo 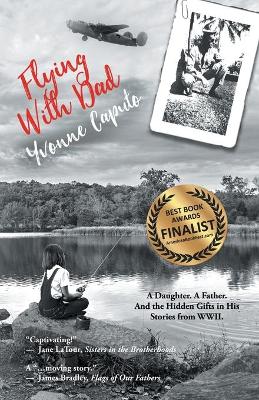 » Have you read this book? We'd like to know what you think about it - write a review about Flying With Dad book by Yvonne Caputo and you'll earn 50c in Boomerang Bucks loyalty dollars (you must be a Boomerang Books Account Holder - it's free to sign up and there are great benefits!)