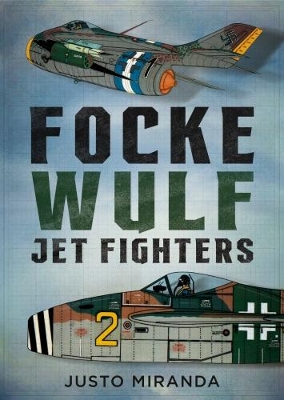 The biggest success of the Focke Wulf company during the Second World War was the choice of a radial engine for the Fw 190 fighter, in this way avoiding to compete against Messerschmitt for the in line engines. The decision of the Oberkommando der Luftwaffe to assign the few turbojets available to the Messerschmitt and Arado firms and the discovery of the terrible aerodynamic effect known as compressibility buffeting by mid-1942, made the life of fighter designers of the time very interesting. The Kurt Tank team proposed to install a centrifugal turbojet of his design in the nose of an Fw 190 A/3 with the intention of replacing it with a Jumo 004 B when available in 1943. Several designs followed that were able to use all turbojets, turboprops, ramjets and rocket engines, either projected or at their disposal. They constitute the documental foundation of this book. After failing in the TL Jagdfleugzeug contests in March 1943, Volksflugzeug in September 1944 and Hochleitungs Nachtjager in January 1945, Focke Wulf could finally overcome its competitors with the great Jagernotprogramm design Ta 183. Although it was too late to intervene in the Second World War, it served as inspiration for numerous designs of other countries during the first years of the Cold War.

» Have you read this book? We'd like to know what you think about it - write a review about Focke Wulf Jet Fighters book by Justo Miranda and you'll earn 50c in Boomerang Bucks loyalty dollars (you must be a Boomerang Books Account Holder - it's free to sign up and there are great benefits!)

Born with the B-52, this tech drawer and Spanish Air Force Museum advisor uses advanced drawing methods to rebuild historical aircraft, starting from original parts. Historian specialized in German Secret Weapons; he usually works in the twilight zone between rational engineering and Nazi esotericism, without letting himself being dragged by the dark side of the force. His research has helped to deconstruct several myths on the flying saucers and the Hitler A bomb. Justo has published seven books and thirty monographs on aeronautical subjects. He lives in Madrid with his wife Paula, journalist at Reuters and co-author of his works.

Ultimate Piston Fighters of the Luftwaffe
No Stock on Hand, Supplier Has No Due Date for Supply.
$53.99 $59.99

Ultimate Flying Wings of the Luftwaffe
No Stock on Hand, Supplier Has No Due Date for Supply.
$62.99 $69.99