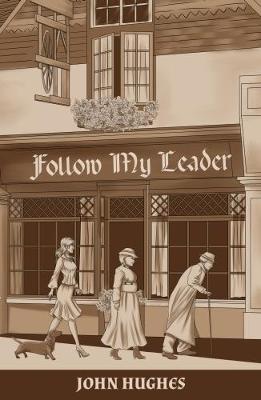 HIM?
Alive and well and living in Reigate in 1951?
Surely not . . .
Rowena Furse and Erika von Tirpitz are unlikely
friends. Rowena loves gardening and opera -
Erika loves gin and men. Despite their differing
lifestyles, they have something in common -
Mr Morell, an elderly German refugee they
have taken under their wing.
One afternoon, led astray by Erika, the usually
teetotal Mr Morell drinks some gin and, whilst
under the influence, makes an astonishing confession.
The revelation sparks a chain of bizarre events -
mistaken identity, mayhem at Reigate carnival, and
even murder. The trail stretches from leafy Surrey to
the Canary Islands and back.
Is Morell's claim genuine, or is he, in Erika's words, just
`plain bonkers'?
Ben Grimshaw, cub reporter on the Surrey Mirror, tries
to fathom it all out. But it takes his Fleet Street
journalist brother, Storm, to unravel the truth.
Ultimately, all roads lead to the old fort on top of
Reigate Hill.

» Have you read this book? We'd like to know what you think about it - write a review about Follow My Leader book by John Hughes and you'll earn 50c in Boomerang Bucks loyalty dollars (you must be a Boomerang Books Account Holder - it's free to sign up and there are great benefits!)

John Hughes was born in Sutton Coldfield, in the English Midlands, studied music at Royal Holloway College and has lived in Surrey for most of his adult life. He has earned a living in a variety of ways - selling pianos in Harrods, playing keyboards in a tribute band, as a magazine editor, in recruitment and most recently managing in the NHS. He has written half a dozen non-fiction books and Follow My Leader is his second novel. The first, Spitfire Spies, was published by Austin Macauley in 2016. John Hughes has also produced and directed films and written screenplays, with Home Alone, The Breakfast Club, Uncle Buck and Ferris Bueller's Day Off to his credit - but that's a different John Hughes.

A Preview for this title is currently not available.
More Books By John Hughes
View All