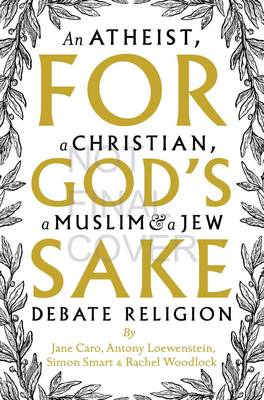 Four Australian thinkers come together to ask and answer the big questions, such as:
What is the nature of the universe? Doesn't religion cause most of the conflict in the world? and Where do we find hope?

We are introduced to the detail of different belief systems - Judaism, Christianity, Islam - and to the argument that atheism, like organised religion, has its own compelling logic. And we gain insight into the life events that led each author to their current position.

Jane Caro flirted briefly with spiritual belief, inspired by 19th century literary heroines such as Elizabeth Gaskell and the Bronte sisters. Antony Lowenstein is proudly culturally, yet unconventionally, Jewish. Simon Smart is firmly and resolutely a Christian, but one who has had some of his most profound spiritual moments while surfing. Rachel Woodlock grew up in the alternative embrace of Baha'i belief but became entranced by its older parent religion, Islam.

Provocative, informative and passionately argued, For God's Sake encourages us to accept religious differences but to also challenge more vigorously the beliefs that create discord.

» Have you read this book? We'd like to know what you think about it - write a review about For God's Sake book by Antony Loewenstein and you'll earn 50c in Boomerang Bucks loyalty dollars (you must be a Boomerang Books Account Holder - it's free to sign up and there are great benefits!)

Jane Caro is an author, novelist, columnist, speaker, broadcaster, enthusiastic tweeter and award winning advertising writer. Antony Loewenstein is an independent Australian journalist, photographer and blogger. He is the author of two bestselling books, My Israel Question and The Blogging Revolution and co-editor of Left Turn and After Zionism. Simon Smart is a Director of the Centre for Public Christianity. He has years of experience writing and editing both academic curricula and popular books. Rachel Woodlock, M.Islam.Std. (Melb), is an academic and writer specialising in Islam and Muslims in the West.

A Preview for this title is currently not available.
More Books By Antony Loewenstein
View All