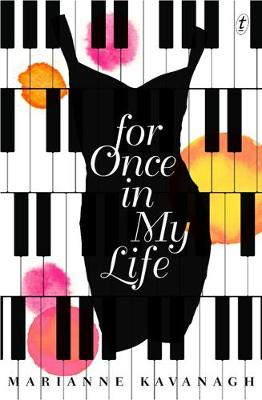 For Once In My Life

Description - For Once In My Life by Marianne Kavanagh

This was George. She recognised him, although she had never met him. All around were people pressing into him, shouting over him, jostling him, and he stood there, looking at her, completely and utterly familiar. She was shocked, because of that jolt of recognition. But at the same time she was reassured. He was exactly as she knew he would be.

Tess and George are soul mates. They've just never met each other.

They both live in London. They went to the same university. But throughout their twenties, despite their shared friends' best efforts, they never come face to face. And now they're stuck with partners who don't understand them and jobs that make them unhappy, always settling for second best.

Finally they meet at a friend's thirtieth birthday party. Can they disentangle themselves from their former lives and grab hold of their one chance to be together? Or is it too late?

For Once in My Life is a love story that teeters on the edge of disaster. It's about whether it's better to compromise-or to wait for your soul mate.

Buy For Once In My Life by Marianne Kavanagh from Australia's Online Independent Bookstore, Boomerang Books.

Other Editions - For Once In My Life by Marianne Kavanagh 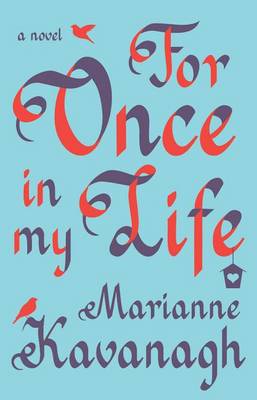 Book Reviews - For Once In My Life by Marianne Kavanagh

» Have you read this book? We'd like to know what you think about it - write a review about For Once In My Life book by Marianne Kavanagh and you'll earn 50c in Boomerang Bucks loyalty dollars (you must be a Boomerang Books Account Holder - it's free to sign up and there are great benefits!)

Book Review: For Once In My Life by Marianne Kavanagh - Reviewed by CloggieA (23 Apr 2014)

For Once In My Life is the first novel by British magazine columnist and editor, Marianne Kavanagh. For years, their friends have been telling them that they are ideal for each other, what with George’s love for 1940s jazz music and Tess’s preoccupation with vintage fashion. But while they almost encounter each other many times, something (a bout of gastro, a close friend’s heartbreak, lost contact lenses) always prevents them from actually meeting. And anyway, Tess is happily settled with her logical, organised and totally gorgeous boyfriend Dominic, isn’t she? And yet, neither George nor Tess feels their life is heading in quite the direction they had hoped: George’s passion for jazz falls by the wayside as he marries ambitious lawyer, Stephanie and finds himself teaching small children to play the piano; renovating a flat in Penge with Dominic ensures that Tess’s dream to own a vintage clothing shop remains just that. When they finally do meet, their joy at recognising their soul mate is tempered by the seemingly inextricable attachments they have made in their separate lives. Kavanagh has peopled her novel with characters recognisable from everyday life and faced them with common dilemmas. These eminently likeable (or in some cases, detestable) characters and some ten years of their lives are captured in some marvellously descriptive prose: “…the bewildering chaos that followed him around wherever he went – lost keys, odd socks, off milk, bank cards that wouldn’t work and passwords he couldn’t remember, a seething, scuttling mass like cockroaches in a dark basement that you only see, for one horrified moment, when you turn on the light” and “ Tess… now thought of money as risky and unreliable – something that disappeared, without warning, into thin air. Fear of money wiggled through her life like a vein of thin blue mould in Stilton.” The reader is treated to laugh-out-loud moments generated variously by witty dialogue, sit-com (meeting the French supplier) and almost slap-stick situations (the borrowed Paris flat); parts may well reduce the reader to tears; and many words of wisdom are spoken (often by unexpectedly astute individuals). Kavanagh explores several themes: degrees of separation; settling for second best; fighting for what you believe in; second chances in life; and the existence of a soul mate. Tess tells the reader “Some people make it alone. But they’re the rare ones. They’re the ones made of steel. The rest of us need to find someone to love us and encourage us and keep us safe.” Funny and heart-warming, this is a superb debut novel and readers will, without doubt, look forward to more from Marianne Kavanagh.

Marianne Kavanagh has worked on a number of UK magazines, including Woman, Tatler and the Telegraph's Saturday magazine. She joined the launch team of Marie Claire, where she became deputy editor, before leaving to spend more time with her family. Since then, as a freelance editor and feature writer, Marianne has contributed to a wide variety of newspapers, magazines and websites, including the Telegraph, Mail, Guardian, Marie Claire, Easy Living, MyDaily and Red. She writes a weekly column, `Surviving Teenagers', for the parenting site Parentdish. She lives in London.

A Preview for this title is currently not available.
More Books By Marianne Kavanagh
View All