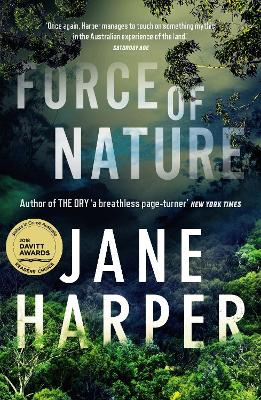 From the international bestselling author of The Dry and new novel The Survivors.

Five women reluctantly pick up their backpacks and start walking along the muddy track. Only four come out the other side.

The hike through the rugged Giralang Ranges is meant to take the office colleagues out of their air-conditioned comfort zone and teach resilience and team building. At least that is what the corporate retreat website advertises.

Federal Police Agent Aaron Falk has a particularly keen interest in the whereabouts of the missing bushwalker. Alice Russell is the whistleblower in his latest case - and Alice knew secrets. About the company she worked for and the people she worked with.

Far from the hike encouraging teamwork, the women tell Falk a tale of suspicion, violence and disintegrating trust. And as he delves into the disappearance, it seems some dangers may run far deeper than anyone knew.

PRAISE FOR FORCE OF NATURE

"Force of Nature bristles with wit; it crackles with suspense; it radiates atmosphere. An astonishing book from an astonishing writer" A.J. Finn, author of The Woman in the Window

"I loved The Dry. Force of Nature is even better. Brilliantly paced, it wrong-foots the reader like a rocky trail through the bush" Susie Steiner, author of Missing, Presumed and Persons Unknown

"Lord of the Flies in the Australian outback, with grown women in place of school boys. I loved every chilling moment of it. A blistering follow-up to The Dry from one of the best new voices in crime fiction" Sarah Hilary, author the DI Marnie Rome series

"...once again Harper manages to touch on something mythic in the Australian experience of the land" The Age

"The narrative is finely constructed, with perfectly measured pace and suspense. So much so that it reminded me of another master of form, Liane Moriarty. As with Moriarty, Harper has that rare touch that manages to cross the genre divide and appeal more widely to general readers" The Saturday Paper

"Gripping thriller will have readers hooked" The Sunday Telegraph

"Force of Nature proves Jane Harper, author of The Dry, is no one-hit wonder. Its premise is instantly gripping" The Herald Sun

Other Editions - Force of Nature by Jane Harper 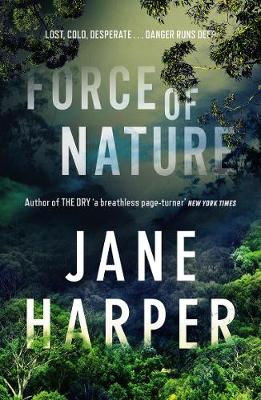 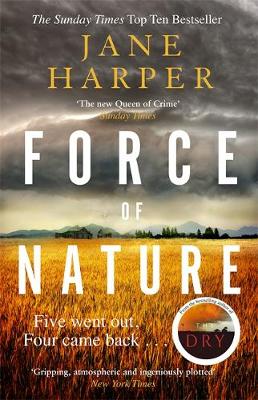 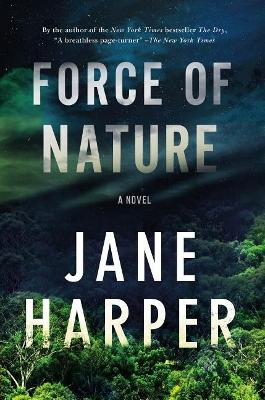 » Have you read this book? We'd like to know what you think about it - write a review about Force of Nature book by Jane Harper and you'll earn 50c in Boomerang Bucks loyalty dollars (you must be a Boomerang Books Account Holder - it's free to sign up and there are great benefits!)

5 stars “It wasn’t any one thing that went wrong, it was a hundred little things. It all kept adding up until it was just too late.”

Force of Nature is the second book in the Aaron Falk series by award-winning Australian journalist and author, Jane Harper. A late-night call has AFP agent Aaron Falk and his Financial Intelligence Unit partner Carmen Cooper heading for the Giralong Ranges. A corporate team-building weekend has gone wrong and one of the participants, Alice Russell, is missing. Alice is the whistle-blower in their current case, so Falk and Cooper are concerned that her actions have been exposed to their target, resulting in some sort of retaliatory action.

But when they arrive, the local Police Sergeant shares his own concerns: that Alice may be a victim of Sam Kovac, the son of notorious serial killer, Martin Kovac, whose killing field was in the Giralang Ranges. And as they question the remaining members of the party, they become aware of just how unpopular Alice was with her colleagues. Could she have come to harm at their hands? Or has the pressure simply become too much, prompting her to disappear off the scene? Has it anything to do with certain photos and clips spreading on social media?

Falk’s second outing is easily as fine as his first. The narrative alternates between Falk’s observations as he investigates, and the account of events during the weekend from the perspective of each of the four remaining participants. It soon becomes apparent that none of those questioned is completely candid about what happened, or what they know. The storyline is highly credible, with several twists and red herrings keeping the reader guessing right up to the exciting climax.

Harper effortlessly evokes the Australian winter mountain landscape, and her characters are typical of those one might encounter in an office environment. Falk’s inner monologue and his dialogue with Cooper give the reader insight into his career choice and personal history, and reinforce his integrity. This is another excellent example of Aussie Crime Fiction and, whether or not it features Aaron Falk, more from Jane Harper will be eagerly anticipated.

Jane Harper worked as a print journalist for thirteen years both in Australia and the UK, and now lives in Melbourne with her husband and daughter. Her first novel, The Dry, was an international bestseller, winning numerous top awards including the Australia Book Industry and Indie Book of the Year awards, the UK's CWA Gold Dagger Award for Best Crime Novel and the Victorian Premier's Literary Award for an Unpublished Manuscript. Jane's novels, The Dry and Force of Nature, have been sold to 34 territories worldwide.