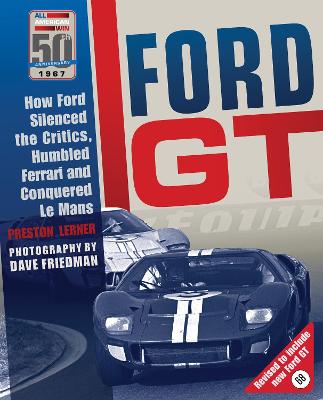 Get the whole story on the car built to beat the world - Ford's GT40.

The Deuce took Ferrari's actions as a personal insult. Word was sent down from on high: beat Ferrari. Ford settled on UK-based Eric Broadley's Lola GT, a cutting-edge car that featured a mid-engine chassis and small-block Ford V-8 power. The Lola GT would morph into the Ford GT. Carroll Shelby helped shape it into the 'Mark II' GT40. The result was one of the most legendary wins in racing history: Ford's 1-2-3 sweep of Le Mans in 1966.

Ford GT40 celebrates the 50th anniversary of Ford's iconic victory, providing the detailed back story leading to that historic win, as well as the follow-up win in 1967. The GT40's last two competitive seasons in 1968 and 1969 are also covered, for a complete view of this remarkable era in racing. Author Preston Lerner details the ups and downs of Ford's GT program, accompanied by Shelby American photographer Dave Friedman's historic images. Come re-live one of the most exciting stories in all of racing history!

» Have you read this book? We'd like to know what you think about it - write a review about Ford GT book by Preston Lerner and you'll earn 50c in Boomerang Bucks loyalty dollars (you must be a Boomerang Books Account Holder - it's free to sign up and there are great benefits!)

Preston Lerner, a regular contributor to Automobile magazine, has written about motorsports for publications ranging from Sports Illustrated to the New York Times. Lerner has co- authored Motorbooks titles Winning: The Racing Life of Paul Newman and History's Greatest Automotive Mysteries, Myths, and Rumors Revealed with Matt Stone. Dave Friedman was Shelby American's official photographer in the 1960s, accompanying the team to races all around the world. He is a longtime motorsports and film-still photographer and the author of several motor racing books, as well as a photography contributor to dozens more. Friedman lives in Newport Beach, California.

A Preview for this title is currently not available.
More Books By Preston Lerner
View All