Forgotten Men is the long overdue account of the
significant contribution to the Australian Army of the
Australian Army Veterinary Corps in two world wars. One
of the army's smallest and least recognised corps, its
humble beginnings and quiet work in the background belie
the crucial role of the Corps in supporting wartime
operations and dealing with logistical issues never
envisaged before 1915.
While their place in military history is often
overlooked, the men of the Australian Veterinary Corps
deserve recognition. Stoic and hardworking, they
unselfishly worked among the horrors of war, to provide
the support needed for army units and their animals.
While the Veterinary Corps reached its peak during the
Great War, its role did not end when the guns fell silent
in 1918. Instead, the Corps continued to support military
activities across Australia until horsepower finally gave
way to mechanisation in World War II. The Corps' success
in enabling the 1st Australian Imperial Force to fight in
two theatres, each with its own peculiar veterinary
problems, is an achievement worth recording.

Doctor Michael Tyquin is a consulting historian based in
Canberra. He has published extensively in the areas of
Australian social, medical and military history. He is a
serving member of the Australian Army Reserve which he
joined as a medical assistant with the 4/19th Prince of
Wales Light Horse. He is the official historian of the
Royal Australian Army Medical Corps and is an Adjunct
Professor at the University of Queensland's Centre for
Military and Veterans' Health. 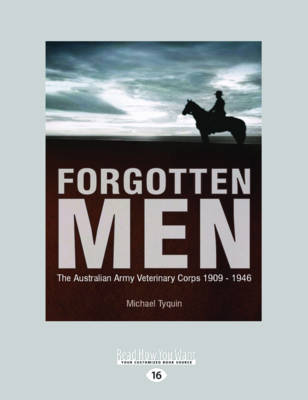 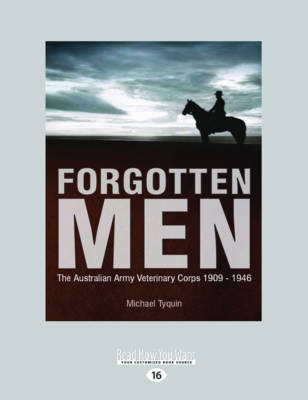 » Have you read this book? We'd like to know what you think about it - write a review about Forgotten Men book by Michael Tyquin and you'll earn 50c in Boomerang Bucks loyalty dollars (you must be a Boomerang Books Account Holder - it's free to sign up and there are great benefits!)


A Preview for this title is currently not available.
More Books By Michael Tyquin
View All

Gallipoli: An Australian Medical Perspective
No Stock on Hand, Supplier Has No Due Date for Supply.
$41.39 $45.99