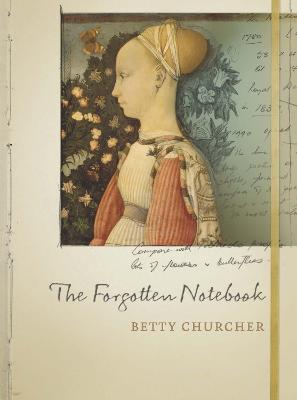 "In the 1990s Betty Churcher drew her way around the galleries of the world as she arranged artwork loans for blockbuster exhibitions at the National Gallery of Australia. In 2014 she discovered a sketchbook she had forgotten and decided to create a final companion volume to her bestselling Notebooks series. She wrote the manuscript in six months, but died shortly after completing it.
A prize-winning artist in her own right, Betty's sketches were inspired by works of some of the biggest names in art- Leonardo da Vinci, Michelangelo, Rubens and Vermeer through to Picasso, Cezanne, Monet and Duchamp. Betty's sketches and notes bring their artworks to life as she explores the stories of how they were created and reveals each artist s influences.
As in the bestselling Notebooks and Australian Notebooks, The Forgotten Notebook showcases Betty Churcher's greatest talents- championing art and sharing the excitement of discovering meaning in the great artworks of the world."

» Have you read this book? We'd like to know what you think about it - write a review about Forgotten Notebook book by Betty Churcher and you'll earn 50c in Boomerang Bucks loyalty dollars (you must be a Boomerang Books Account Holder - it's free to sign up and there are great benefits!)

Betty Churcher AO was one of Australia's most loved cultural commentators. A Fellow of the Australian Academy of the Humanities, she was director of the Art Gallery of Western Australia from 1987 to 1990 and of the National Gallery of Australia from 1990 to 1997. She wrote several acclaimed books, including Notebooks, Australian Notebooks, The Art of War, Treasures of Canberra and Adam & Sarah Explore Turner, she was art critic for The Australian and wrote and presented successful television art programs such as Take Five and Hidden Treasures. Earlier in her life she was a painter and won a travelling scholarship to Europe, where she became an associate and graduate of the Royal College of Art, London and gained a Master of Arts from the Courtauld Institute of Art at the University of London. Betty had four sons and seven grandchildren and lived in sheep country in the Southern Tablelands of New South Wales until her death in 2015.

A Preview for this title is currently not available.
More Books By Betty Churcher
View All