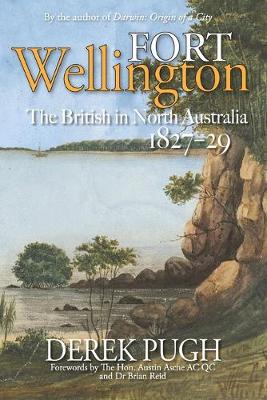 The Iwaidja woman, her belly opened by a bayonet, slipped below the dark water. Her 6-year-old daughter, Reveral, watched in terror. Her baby sister was already dead, hit by a slug in the first volley or drowned, but a young man lying on the sand with his intestines spilling out had to be finished off - out of mercy! Reveral, wounded in her side, was carried back to the fort in triumph, for she was worth a GBP5 reward from Commandant Smyth. Capturing an Australian was how the British sought to make friends with the Iwaidja, on whose lands the new British garrison of Fort Wellington was being built. It was an appalling start, but eventually, with the remarkable Captain Collet Barker in charge, friendships were established. At last, it looked like a successful trading settlement would follow, the British would live in peace with the local tribe, and they would welcome, and protect the Macassan fishermen, who came annually to the peninsula for trepang. But then, a twice ship-wrecked captain struggled ashore with the order to abandon the north coast altogether, and the soldiers, Royal Marines, convicts, their families, and even Reveral herself, wearily packed up the settlement and moved on, leaving the fort and its gardens to the Iwaidja. 'Another of our sweet, nice, wise, profitable, gingerbread, out of the way playthings is to go', rejoiced The Australian, in 1829. This is the extraordinary forgotten story of the second attempt at settling Australia's north coast. 'an absorbing and detailed narrative'

» Have you read this book? We'd like to know what you think about it - write a review about Fort Wellington: The British in North Australia 1827-29 book by Derek Pugh and you'll earn 50c in Boomerang Bucks loyalty dollars (you must be a Boomerang Books Account Holder - it's free to sign up and there are great benefits!)


A Preview for this title is currently not available.
More Books By Derek Pugh
View All

How to Get a PhD: A Handbook for Students and their Supervisors
No Stock on Hand, Supplier Has No Due Date for Supply.
$61.16 $67.95