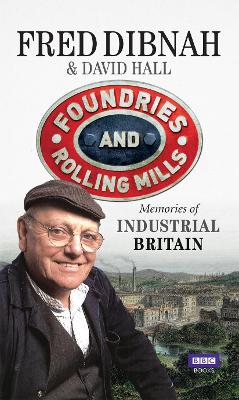 Join engineer, steeplejack and beloved storyteller Fred Dibnah, as he takes you on a personal tour through industrial Britain.

Bringing to life landmark events from the eighteenth to the early twentieth century in his typically engaging and anecdotal style, Fred introduces the great inventors from the age of steam, describes the day-to-day operation of railways, mills, forges and factories, and paints a vivid picture of what life was like for the mill-hands, colliers and engineers who laboured in industrial Britain - the workshop of the world.

With a comprehensive gazetteer, which lists details of over 230 places of industrial interest - from steam railways and ships, to windmills and watermills - Foundries and Rolling Mills is a glorious portrait of Britain at the height of its industrial power, from one of our most revered figures.

» Have you read this book? We'd like to know what you think about it - write a review about Foundries and Rolling Mills book by David Hall and you'll earn 50c in Boomerang Bucks loyalty dollars (you must be a Boomerang Books Account Holder - it's free to sign up and there are great benefits!)

Fred Dibnah was a steeplejack, engineer, craftsman, artist, inventor, steam enthusiast and devotee of Britain's industrial heritage. He first appeared on television in 1979 and became a much-loved cultural icon. An exhaustive storyteller, Fred presented the television series Magnificent Monuments, Age of Steam, Industrial Age and Made in Britain. David Hall, a former journalist, teacher and producer for over 20 years, has made programmes for the BBC, ITV, Channel 4 and American television. He made all of Fred's last television series and was the producer of Fred Dibnah's World of Steam, Steel and Stone. David's writing credits include Fred- The Definitive Biography of Fred Dibnah, Fred Dibnah's Buildings of Britain, and with Fred, Fred Dibnah's Age of Steam.

A Preview for this title is currently not available.
More Books By David Hall
View All

A Compassionate Call, and Hand Reached Forth, in Tender Gospel Love, to All Such Persons, as Having Once Made Profession of the Blessed Truth, ... by David Hall.
$32.51 $36.12

An Epistle of Love and Caution to the Quarterly and Monthly Meetings of Friends in Great-Britain, or Elsewhere. by David Hall. the Second Edition.
$34.71 $38.57

An Epistle of Love and Caution to the Quarterly and Monthly Meetings of Friends in Great-Britain, or Elsewhere. by David Hall. the Third Edition.
$39.12 $43.47

An Epistle to Friends in Great-Britain, or Elsewhere, Containing Advice and Consolation, Particularly Address'd to Those Who Are Under Tribulation, ... by David Hall.
$34.71 $38.57

A General Epistle to Friends, to Be Read in Their Respective Quarterly and Monthly Meetings. by David Hall.
$32.51 $36.12

An Epistle of Love and Caution to the Quarterly and Monthly Meetings of Friends in Great-Britain, or Elsewhere. by David Hall.
$34.71 $38.57