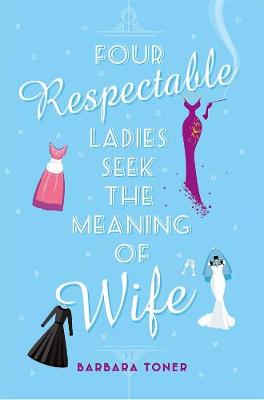 A hilarious and heart-warming novel about the true meaning of 'for better or worse' - both in marriage and in friendship.

'Marriage isn't always a bed of roses. And there are many ways to be a wife,' the vicar informs the town ...

It's 1930, and as the Depression overtakes rural New South Wales, what it means to be a wife tests the four respectable ladies of Prospect to their very limit.

Louisa Worthington fled to the city ten years ago, pregnant, poor and under a cloud of scandal. Now she's back - blonde and brazen - with her heart set on the married son of the town's mayor.

Adelaide Nightingale, newly widowed and starved of romance, yearns for adoration, security and a version of herself defined by beauty not business.

Maggie Albright dreams of empire building, but is hamstrung by her over-cautious husband, who grows less handsome by the day.

Then there's Pearl Fletcher, happily married to Joe, the district's most successful sheep farmer, but protecting a secret that could tear their family apart.

And hovering in the town's shadows is a ghost from their past. A man newly released from jail ruthlessly bent on exploiting the ladies' hopes and fears to get what he wants. And what he wants is Louisa . . .
Praise for Four Respectable Ladies Seek Part-time Husband
'Loveable to the end . . . with a cast of colourful characters.' Herald Sun

» Have you read this book? We'd like to know what you think about it - write a review about Four Respectable Ladies Seek the Meaning of Wife book by Barbara Toner and you'll earn 50c in Boomerang Bucks loyalty dollars (you must be a Boomerang Books Account Holder - it's free to sign up and there are great benefits!)

5 stars Four Respectable Ladies Seek The Meaning Of Wife is the sequel to Australian journalist and author, Barbara Toner’s earlier novel, Four Respectable Ladies Seek Part-time Husband. When Louisa Worthington arrives at the funeral of Mayor George Mayberry on the arm of his (married) son, William, the town of Prospect is agog. Louisa has been absent for ten years, and few in the town have forgiven her scandalous behaviour. Three women, more than most, are alarmed to see Louisa again.

Adelaide Nightingale, now six months widowed, has certainly not forgotten the turmoil that Louisa caused in her marriage. Maggie Albright is less dismayed by her snubbing than intrigued by Louisa’s fine appearance: “If you set aside her rudeness and snobbishness, you could just about admire Louisa for her single-mindedness.” But Pearl Fletcher is immediately thrown into a panic, worried for her ten-year-old daughter, Daisy, and the guilty secret she has held for years.

Prospect, like everywhere else, is in the grip of the Depression, even if many in the town don’t quite yet know what that means. There have been suicides, or rumours of them; business is down at Nightingale’s and Adelaide doesn’t know what to do; Florence Mayberry and her son are disappointed to find that the Mayor didn’t provide as well as expected; and yet, Maggie Albright is, despite sound advice to the contrary, ready to throw the couple’s savings into her dream dress shop, which will, she is certain, excite the ladies of Prospect.

One person seems unaffected by the financial climate: Saul Macfarlane, having recently purchased Upsand Downs Station, is a relative newcomer to Prospect and obviously wealthy, if his spending and donations are any indication. He seems happy to give financial advice and look after investments, if asked.

Adelaide and Maggie are accustomed to taking their problems to the Pearl, who always devises a solution, so they are distressed to find her now either unavailable, or not as sympathetic as their troubles merit. Louisa, too, puts demands on Pearl, who is very capable, but stretched by concerns for Daisy and standing in for the shearer’s cook.

In this sequel, Toner gives the reader a plot that manages to include an estranged husband (or two), information sold, brothers incommunicado, a runaway ten-year-old, a bad hair-do, a hospitalisation following a roof collapse, a frenzy of dressmaking, possible cases of food poisoning, a search for foundlings, a missing photo, a Grand Opening, a wedding, quite a lot of miscommunication, and a number of what could be scams.

Toner portrays this Depression-era country town wonderfully well. There are a lot of minor characters to keep track of, it’s true, but they are well drawn and they are what makes the town, with their pretentiousness, their gossiping, their shifting loyalties, all these convey the mood of the times with consummate ease. None of the characters is truly evil but each has flaws and sometimes, self-delusion, pride, shame, guilt, vulnerability or simply desperation leads them to behave less than charitably. No one has a fortune, but several want to take advantage of someone whom they perceive as having one.

There are plenty of laugh-out-loud moments and these two books would adapt well to a TV mini-series. Toner provides a handy map of the town and the epilogue wraps things up perfectly while still allowing scope for more of this marvellous cast of characters.

While there is ample recap of the previous book (Husband) to allow this one (Wife) to be read as a stand-alone, this does mean spoilers for Husband, but why readers would deprive themselves of the pleasure of reading Toner's introduction of these characters defies explanation. A brilliant sequel. This unbiased review is from a copy provided by Penguin Random House


A Preview for this title is currently not available.
More Books By Barbara Toner
View All