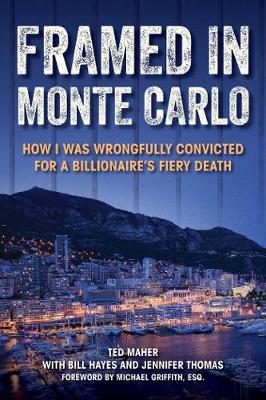 Framed in Monte Carlo: How I Was Wrongfully Convicted for a Billionaire's Fiery Death

Description - Framed in Monte Carlo: How I Was Wrongfully Convicted for a Billionaire's Fiery Death by Ted Maher

As featured on 60 Minutes, Dateline, Inside Edition, and 48 Hours, the shocking true story of banker Edmond Safra's death and the man wrongfully convicted and imprisoned for the crime.

When billionaire banker Edmond Safra died in the ashes of Monaco's La Belle Epoque on December 3, 1999, the event made international headlines--for many reasons. One, of course, was the sheer wealth of the Lebanese mogul and his formidable presence in the international banking world. But the more seductive reason for the worldwide attention was the strange and intriguing way Safra died--ensconced within the armored walls of his vigilantly secured residence in the "safest city in the world."

At 4:45 in the morning, a firestorm gutted Safra's opulent Monte Carlo penthouse, trapping--and killing--Safra and one of his nurses, Vivian Torrente. The fire was ruled arson. Safra's death, the result. The person responsible: ex-Green Beret Ted Maher, another of Safra's nurses. Or so he stood accused.

The true details concerning the bizarre circumstances that led to Safra's death and the subsequent conviction and imprisonment of Ted Maher are contained within the pages of Framed in Monte Carlo: Why I Spent Eight Years in Prison for a Murder I Did Not Commit. It features play-by-play of the night Edmond Safra died, as well as Maher's sham of a trial and his subsequent imprisonment for seven years and eight months. Dangerous French prisons, prison breaks straight out of The Great Escape, daily strip searches, and more pepper the pages of Framed in Monte Carlo.
After Maher had already served over ninety-five percent of his sentence, the chief investigative judge publicly denounced Maher's trial as a sham, one the judge himself had participated in. Ted was freed and his name was cleared - at least officially. But his business is unfinished. Now, for the first time ever, hear the facts straight from the source, including never-before-released details. The biggest question remains: who did kill Edmond Safra? With names like Vladimir Putin being legitimately put forth, the authors' conclusions will shock you.

Buy Framed in Monte Carlo: How I Was Wrongfully Convicted for a Billionaire's Fiery Death by Ted Maher from Australia's Online Independent Bookstore, Boomerang Books.

Book Reviews - Framed in Monte Carlo: How I Was Wrongfully Convicted for a Billionaire's Fiery Death by Ted Maher

» Have you read this book? We'd like to know what you think about it - write a review about Framed in Monte Carlo: How I Was Wrongfully Convicted for a Billionaire's Fiery Death book by Ted Maher and you'll earn 50c in Boomerang Bucks loyalty dollars (you must be a Boomerang Books Account Holder - it's free to sign up and there are great benefits!)


A Preview for this title is currently not available.
More Books By Ted Maher
View All