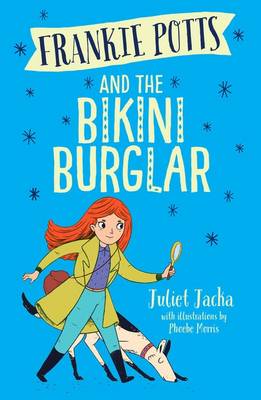 Frankie Potts And The Bikini Burglar

Description - Frankie Potts And The Bikini Burglar by Juliet Jacka

Book 2 in Juliet Jacka's addictive new Frankie Potts series for readers ages 7-10.
Meet Frankie Potts, the village of Tring's number one girl detective. She has flaming red hair, a questioning mind and a very clever dog named Sparkplug. And she is REALLY good at solving mysteries.
Frankie is on the lookout for a human detective sidekick to share her caseload. Finding the right person isn't as easy as you'd think, and she's never had more to juggle. Right now she's having to contend with a new boy from Borneo, whose tales are taller and wilder than his wild black hair; the meanest school office lady in Tring; her arch-enemy Ralph Peter-McGee and his equally brutish ginger tomcat; and helping her Grandma M train a troupe of greyhounds.
Meanwhile, Tring is on high alert - a burglar is on the loose. Random pink items, most notably a bikini belonging to Frankie's teacher, are disappearing from houses all over the village. An exhibition of bejewelled items is just about to open, with a pink, diamond-encrusted bikini as its showpiece. The temptation will be too great for any self-respecting burglar to stay away.
And self-respecting solver of mysteries Frankie is determined to catch the burglar in the act . . . but in her efforts to tidy up her mystery list single-handed, is Frankie ignoring some very important clues?

» Have you read this book? We'd like to know what you think about it - write a review about Frankie Potts And The Bikini Burglar book by Juliet Jacka and you'll earn 50c in Boomerang Bucks loyalty dollars (you must be a Boomerang Books Account Holder - it's free to sign up and there are great benefits!)

Juliet Jacka (Author) Juliet Jacka started writing junior fiction stories when she was on maternity leave with her first daughter (who was luckily a good sleeper). Juliet's first book Night of the Perigee Moon won the 2013 Tom Fitzgibbon Storylines Award and was published in 2014 by Scholastic. Her story The Keeper of Spirit Hill was shortlisted in Tom Fitzgibbon competitions in 2011 and 2013. Her delightful chapter-book series about Frankie Potts, red-haired girl detective was launched by Puffin in July 2016 with #1 Frankie Potts and the Sparkplug Mysteries and #2 Frankie Potts and the Bikini Burglar. Juliet is pleased to be carrying on a family tradition by becoming a published author- she's the third generation to do so. She lives in one of Wellington's hilly suburbs in a red house by a railway line, with her husband and two young daughters. Juliet juggles writing with family life and her work, which involves doing inscrutable digital stuff with websites. Phoebe Morris (Illustrator) As a child, Phoebe Morris always dreamed of becoming a zoo keeper and working with animals. However, persistent allergies meant that she ended up drawing them instead. As an adult, Phoebe now spends her time drawing a range of things - either on paper, or on her custom PC named 'the Millennium Falcon'. In 2015 Phoebe collaborated with author David Hill on the acclaimed picture-book biography of Sir Edmund Hillary, First to the Top. Unanimously praised for the quality of the illustrations, it was named a 2016 Storylines Notable Picture Book. In a review for the NZ Listener, Ann Packer wrote, 'Wellingtonian Phoebe Morris makes a stunning debut as an illustrator . . . From the arresting cover, through cameos of his