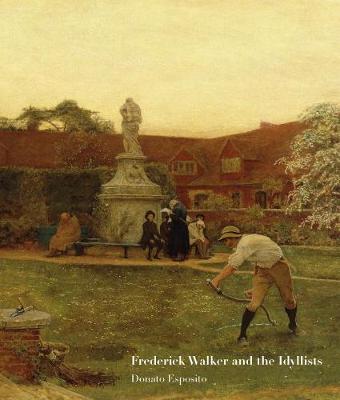 Frederick Walker and the Idyllists

Description - Frederick Walker and the Idyllists by Donato Esposito

This is the first book in over a century to examine the important work of the watercolour artist Frederick Walker (1840-75) and his closest artistic allies. He was greatly admired (and collected) by Vincent van Gogh and was described by Millais as 'the greatest artist of the century' and yet his premature death at the age of 35 cut short his promising career. Walker, together with his close friends George John Pinwell (1842-75) and John William North (1842-1924), forged new artistic identities that sought the perfection of the world around them and the distillation of beauty from seemingly mundane subjects. Donato Esposito focuses successive chapters on the lives and works of each of the core members of Walker's group, charting their unconventional journey from a loosely bound collective rooted in the London-based black-and-white world of commercial illustration to a renowned grouping known as the Idyllists, respected and eagerly collected by galleries and private individuals in Europe, America and Australia.The book, which reproduces many of the Idyllists' works in colour for the first time, represents a vital contribution to the literature on Victorian art and restores the Idyllists to their rightful place in the history of British 19th-century art.

Book Reviews - Frederick Walker and the Idyllists by Donato Esposito

» Have you read this book? We'd like to know what you think about it - write a review about Frederick Walker and the Idyllists book by Donato Esposito and you'll earn 50c in Boomerang Bucks loyalty dollars (you must be a Boomerang Books Account Holder - it's free to sign up and there are great benefits!)

Donato Esposito is an academic and curator who specialises in 18th- and 19th-century art, collecting and taste. From 1999 to 2004 he worked as Curator in the Department of Prints and Drawings, British Museum and was the 2012-13 Andrew W. Mellon Fellow at the Metropolitan Museum of Art, New York.