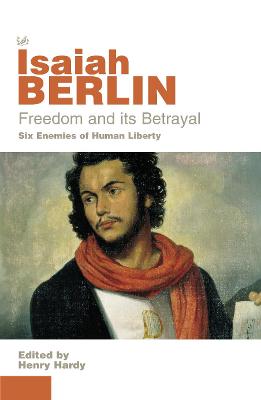 Freedom And Its Betrayal

Description - Freedom And Its Betrayal by Isaiah Berlin

'Never before had someone addressed such abstract topics with such fluency and intensity - these lectures, while presupposing no specialist expertise, introduce some of the key issues in modern political theory in an enthusiastic and quite unpatronising way' Noel Malcolm, Sunday Telegraph

Isaiah Berlin's celebrated radio lectures on six formative anti-liberal thinkers were delivered on the BBC's Third Programme in 1952. They are published here for the first time, fifty years on. Freedom and its Betrayal is one of Isaiah Berlin's earliest and most convincing expositions of his views on human freedom and the history of ideas, views which later found expression in such famous works as 'Two Concepts of Liberty', and were at the heart of his lifelong work on the Enlightenment and its critics.

In his lucid examinations of sometimes difficult ideas Berlin demonstrates that a balanced understanding and a resilient defence of human liberty depend on learning both from the errors of freedom's alleged defenders and from the dark insights of its avowed antagonists. This book throws light on the early development of Berlin's ideas, and supplements his already published writings with fuller treatments of Helvetius, Rousseau, Fichte, Hegel and Saint-Simon, with the ultra-conservative traditionalist Maistre bringing up the rear.

Freedom and its Betrayal shows Berlin at his liveliest and most torrentially spontaneous, testifying to his talents as a teacher of rare brilliance and impact. Listeners tuned in expectantly each week to the broadcasts and found themselves mesmerised by Berlin's astonishingly fluent extempore style. A leading historian of ideas, who was then a schoolboy, records that the lectures 'excited me so much that I sat, for every talk, on the floor beside the wireless, taking notes'. This excitement is at last recreated here for all to share.

Other Editions - Freedom And Its Betrayal by Isaiah Berlin Book Reviews - Freedom And Its Betrayal by Isaiah Berlin

» Have you read this book? We'd like to know what you think about it - write a review about Freedom And Its Betrayal book by Isaiah Berlin and you'll earn 50c in Boomerang Bucks loyalty dollars (you must be a Boomerang Books Account Holder - it's free to sign up and there are great benefits!)

Sir Isaiah Berlin was born in Riga, Latvia, in 1909. In 1921 his family came to England, and he was educated at St Paul's School and Corpus Christi College, Oxford. At Oxford he was a Fellow of New College, Professor of Social and Political Theory, and founding President of Wolfson College. He also held the Presidency of the British Academy. As an exponent of the history of ideas he was awarded the Erasmus, Lippincott and Agnelli Prizes; he also received the Jerusalem Prize for his lifelong defence of civil liberties. He died in November 1997. Henry Hardy, a Fellow of Wolfson College, Oxford, is one of Isaiah Berlin's Literary Trustees. He has edited several other books by Berlin.