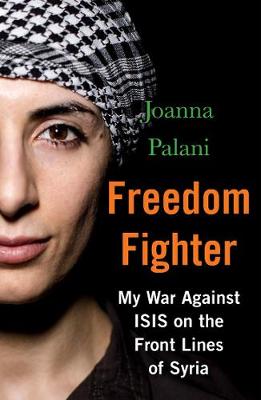 The gripping story of one woman's war against ISIS on the frontlines of Syria.

Joanna Palani made headlines across the world in 2016 when her role fighting on the front line of the Syrian conflict was revealed. She is one of a handful of western women who have joined the international recruits to the Kurdish forces in Syria and is the first woman fighter to tell her story.

Joanna was born to Iranian-Kurdish parents in a refugee camp in Iraq, before her family were accepted in to Denmark. During the Arab Spring, Joanna realised she needed to do something to protect the values she believes in, and the culture she loves. Leaving behind her life as a student, Joanna underwent considerable military training and travelled to the Middle East, where she spent time over several years fighting on the front line, including at the devastating battle for Kobani.

Despite her heroism, Joanna was taken in to custody on her return to Denmark for breaking laws designed to stop its citizens from joining ISIS, making her the first person to be jailed for joining the international coalition. Joanna now lives in Copenhagen under daily threat from ISIS supporters, as she continues her fight for women's rights off the front line.

» Have you read this book? We'd like to know what you think about it - write a review about Freedom Fighter book by Lara Whyte and you'll earn 50c in Boomerang Bucks loyalty dollars (you must be a Boomerang Books Account Holder - it's free to sign up and there are great benefits!)

Joanna Palani played a variety of roles for the YPJ - the female battalion of the Syrian Kurdish group YPG - the Peshmerga and as part of coalition forces, including the SDF, supported by US and UK special forces. Her last position in the YPJ was in a sniper unit.Lara Whyte is a freelance journalist and news producer. Her work has taken her to Iraq, Sierra Leone, Senegal and Mali.