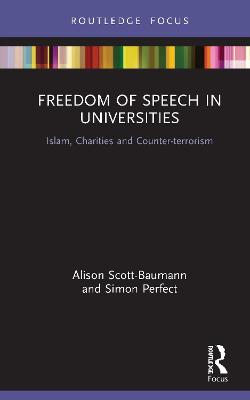 Freedom of Speech in Universities: Islam, Charities and Counter-terrorism

Description - Freedom of Speech in Universities: Islam, Charities and Counter-terrorism by Alison Scott-Baumann

Freedom of speech and extremism in university campuses are major sources of debate and moral panic in the United Kingdom today. In 2018, the Joint Committee on Human Rights in Parliament undertook an inquiry into freedom of speech on campus. It found that much of the public concern is exaggerated, but identified a number of factors that require attention, including the impact of government counter-terrorism measures (the Prevent Duty) and regulatory bodies (including the Charity Commission for England and Wales) on freedom of speech.

This book combines empirical research and philosophical analysis to explore these issues, with a particular focus on the impact upon Muslim students and staff. It offers a new conceptual paradigm for thinking about freedom of speech, based on deliberative democracy, and practical suggestions for universities in handling it.

* The impact of the Prevent Duty and the Charity Commission upon Muslim students, students' unions and university managers

* Students' and staff views about freedom of speech

* Alternative approaches to handling freedom of speech on campus, including the Community of Inquiry

This highly engaging and topical text will be of interest to those working within public policy, religion and education or religion and politics and Islamic Studies.

» Have you read this book? We'd like to know what you think about it - write a review about Freedom of Speech in Universities: Islam, Charities and Counter-terrorism book by Alison Scott-Baumann and you'll earn 50c in Boomerang Bucks loyalty dollars (you must be a Boomerang Books Account Holder - it's free to sign up and there are great benefits!)