"SELECTED BY THE ECONOMIST AS ONE OF THE BEST BOOKS OF THE YEAR Remarkable as it may seem today, there once was a time when the president of the United States could pick up the phone and ask the president of General Motors to resign his position and take the reins of a great national enterprise. And the CEO would oblige, no questions asked, because it was his patriotic duty. In Freedom's Forge, bestselling author Arthur Herman takes us back to that time, revealing how two extraordinary American businessmen-automobile magnate William Knudsen and shipbuilder Henry J. Kaiser helped corral, cajole, and inspire business leaders across the country to mobilize the of democracy ; that propelled the Allies to victory in World War II. I want to see you in Washington. I want you to work on some production matters. With those words, President Franklin D. Roosevelt enlisted Big Bill Knudsen, a Danish immigrant who had risen through the ranks of the auto industry to become president of General Motors, to drop his plans for market domination and join the U.S. Army. Commissioned a lieutenant general, Knudsen assembled a crack team of industrial innovators, persua 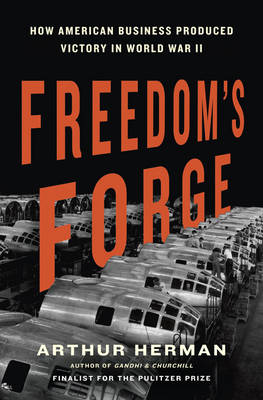 » Have you read this book? We'd like to know what you think about it - write a review about Freedom's Forge book by Arthur Herman and you'll earn 50c in Boomerang Bucks loyalty dollars (you must be a Boomerang Books Account Holder - it's free to sign up and there are great benefits!)

Arthur Herman, visiting scholar at the American Enterprise Institute, is the author of How the Scots Invented the Modern World, which has sold more than half a million copies worldwide. His most recent work, Gandhi, Churchill, was the 2009 finalist for the Pulitzer Prize in General Nonfiction.

A Preview for this title is currently not available.
More Books By Arthur Herman
View All