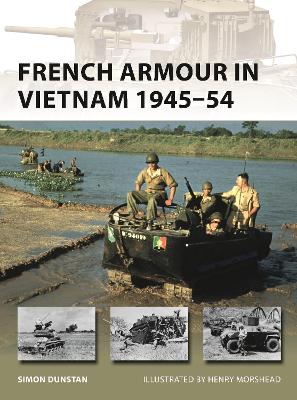 French experience with armour in Indo-China dated back to 1919, when it sent FT-17s to the colony, followed by a variety of armoured cars. After World War II, French troops were equipped with a motley collection of American and cast-off British equipment until the outbreak of war in Korea saw an increase in military aid. This included large numbers of the M24 Chaffee light tank, along with amphibious vehicles such as the M29C Weasel and LVT4 Buffalo, to conduct operations in coastal and inland areas that the Viet Minh had previously thought immune to attack. France's armour was a key part of the battle against the Viet Minh right up until the last stand at Dien Bien Phu.

» Have you read this book? We'd like to know what you think about it - write a review about French Armour in Vietnam 1945-54 book by Simon Dunstan and you'll earn 50c in Boomerang Bucks loyalty dollars (you must be a Boomerang Books Account Holder - it's free to sign up and there are great benefits!)