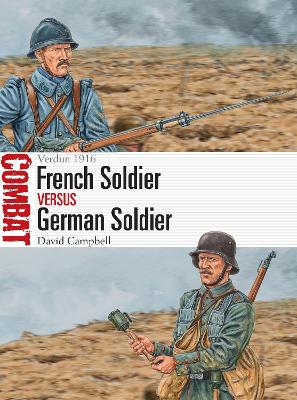 On 21 February 1916, the German Army launched a major attack on the French fortress of Verdun. The Germans were confident that the ensuing battle would compel France to expend its strategic reserves in a savage attritional battle, thereby wearing down Allied fighting power on the Western Front. However, initial German success in capturing a key early objective, Fort Douaumont, was swiftly stemmed by the French defences, despite heavy French casualties. The Germans then switched objectives, but made slow progress towards their goals; by July, the battle had become a stalemate.

During the protracted struggle for Verdun, the two sides' infantrymen faced appalling battlefield conditions; their training, equipment and doctrine would be tested to the limit and beyond. New technologies, including flamethrowers, hand grenades, trench mortars and more mobile machine guns, would play a key role in the hands of infantry specialists thrown into the developing battle, and innovations in combat communications were employed to overcome the confusion of the battlefield. This study outlines the two sides' wider approach to the evolving battle, before assessing the preparations and combat record of the French and German fighting men who fought one another during three pivotal moments of the 101/2-month struggle for Verdun.

» Have you read this book? We'd like to know what you think about it - write a review about French Soldier vs German Soldier: Verdun 1916 book by David Campbell and you'll earn 50c in Boomerang Bucks loyalty dollars (you must be a Boomerang Books Account Holder - it's free to sign up and there are great benefits!)


A Preview for this title is currently not available.
More Books By David Campbell
View All

Day Trading: Master Day Trading for a Living and Create Your Passive Income (A Quick but Comprehensive Guide for the Beginning Trader)
$39.52 $43.91